MH mom, nurse, first served on MHUSD board of trustees 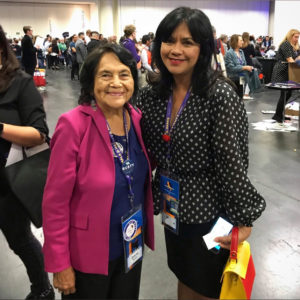 Claudia Rossi and her mother, Auror. Rossi was selected in December to serve as the president of the Santa Clara County Board of Education. Photo courtesy Claudia Rossi.

The Santa Clara County  Board of Education selected Claudia Rossi to serve as its president for 2020. The 52-year-old Morgan Hill resident aspires to improve the lives of students — especially minorities and at-risk youth. Rossi’s passion for education stems from a childhood conversation she had with her mother, Aurora, a hard-working seamstress.

Born in Colombia, Rossi moved with her parents to the United States when she was a baby. Her father did not want to leave their country and was aware the family was going to be treated poorly. Her father grew increasingly depressed in California as they endured racism.

One night, while Rossi was in bed, she woke to hear her parents arguing. Her father told Aurora in a sad voice, “We are not wanted in this country. We are treated like outcasts wherever we go.”

Aurora replied, “I will crawl on my belly for my children to have a better life . . . Someday my children are going to go anywhere and they will be respected and valued.”

Eventually, Rossi’s parents split up. Her father went back to Ecuador, his native country, and her mother stayed in Los Angeles, forcing her to provide for the family as a single mother. Aurora worked day and night for the garment industry, sewing to be able to pay for Rossi, her sister, Freida, and her brother’s, John, education at a private Catholic school. Her mother instilled a good work ethic into her children. She never stopped laboring at making dresses to provide them with a better future. “I would fall asleep to the hum of her sewing machine,” Rossi recalls.

Rossi married a banker when she was in her early 20s. The couple went to live in Mexico City for his job. There, Rossi became very active volunteering her time in community service activities. She wanted to work for an organization but the man in charge told her she was just the wife of a banker and didn’t have the necessary skills for the position. Rossi was told that if she was a nurse, they could hire her.

“This man’s cruelty opened my eyes,” she said. “I decided I’m going to be a nurse.”

When she and her husband left Mexico to live in Washington, D.C., Rossi started training to become a registered nurse and earned her degree at the Univeristy of the District of Columbia. She started her new career at George Washington University Medical Center.

“I worked as an RN for three years,” she said. “We started a family, moved to California, and I became a full-time mom.”

To focus as a mom on raising young Jeffrey and Sofia, Rossi  stopped working as a nurse. When her children began attending Nordstrom Elementary School in Morgan Hill, she volunteered in the classrooms. She would help translate for teachers with Spanish-speaking children. In 2010, several boy students at Live Oak High School wore American flag T-shirts while the school was celebrating the Cinco de Mayo holiday. The school principal at that time, fearing racial tensions might lead to violence, asked the students to turn their T-shirts inside out or go home. Soon after, a television crew arrived and the incident became a controversial national story about freedom of speech.

Rossi felt concerned at how the Morgan Hill community was growing polarized at the incident. Some in South Valley, including Gilroy, thought the young kids had a right to wear patriotic attire while others thought it was culturally disrespectful in a day intended to celebrate Mexican-American relations. She attended a Morgan Hill Unified School District meeting at Britton Middle School where she addressed the public, especially the Latino students: “One of the ways you can honor your heritage is by making sure you get an education, you succeed, you put your mark in the world by doing something positive.”

These words would mark the beginning of Rossi’s political journey. “The next day I got all these calls saying, “You need to run for school board.’” Inspired to serve in public office, she ran in 2010 for a position as a trustee. Voters decided to put the first-time candidate in a seat on the board.

During her years on the MHUSD board, Rossi helped create the Project Roadmap program she co-founded with Britton science teacher George Flores and community activist Mario Banuelos. For some students who might be the first in their families to have the opportunity to go to college, the process of applying for a four-year university is daunting. Through Project Roadmap and its “No Excuses Conference” students and their parents discovered a university education is not unattainable. The first brought in 85 students and 65 parents. The student organizers decided everything from the workshops to the topics discussed.

“Applying for college involved a skillset my mom didn’t have,” Rossi said. “Being in a position to serve, you have an opportunity to make a difference.”

Rossi reached out to Jeff Dixon, president of the Morgan Hill Youth Alliance at the time, because she was concerned not enough Latino children were using  the Outdoor Sports Center on Condit Road. She created the Sports Mentor Program to help youth use the facility. They were picked up by a school bus to play soccer while they were mentored by local firefighters and police officers. The idea of providing a friendly form of mentorship helped both law enforcement and youth engage in a positive sporting environment.

After four years of serving on the MHUSD board, Rossi had no intention to run for public office again. However, several South Valley leaders asked her to run for the Santa Clara County Board of Education, which offers services for special-needs students who have mental and physical disabilities, educates incarcerated youth, and offers programs for students who have dropped out of high school. Going through a political campaign for the county board  came with its own set of challenges.

“Running at that level is very challenging because $250,000 was spent on many negative mailers (against me),” she said. On Election Day 2014, Rossi typed a statement believing she was not going to win. She wanted to speak about her concerns in the danger to democracy by campaign funding portraying her in a negative light.

“I wanted it to address how much money was spent on me, a stay at home mom, someone who is not connected to wealth,” she said.

Four years after her election, Rossi’s short-term priority in taking on the role in December as president of the County Board of Education is the 2020 U.S. Census. Another is promoting mental health in students. She believes young people need more than being suspended or expelled. They need professional therapy. Rossi’s long-term goal is to bring in more men and women in the Latino community into the teaching profession.

“When a child sees someone who looks like them in front of the classroom and can communicate with their parents in their language, students do better,” she said.  “The county office has an opportunity to make sure we are looking at bringing students who are bi-literate, bilingual, and bicultural. That is something that is near and dear to my heart — to increase diversity in the teaching branch of Santa Clara County.”

While in public service, Rossi met Jim Levis, a Britton science teacher. They became engaged to be married June 28. (In California, after 21 years of marriage, Claudia and her first husband divorced.)

Her passion comes from knowing that in many minority families the difference between extreme poverty and hopelessness and a future with opportunity is determined by how much society  provides young people with an opportunity to achieve academically.

“If somebody tells you that you can’t do something,” Rossi said, “it lights a fire in your belly.”

Areli Lopez is a Morgan Hill resident. She graduated in 2019 from U.C. Davis with a degree in English.