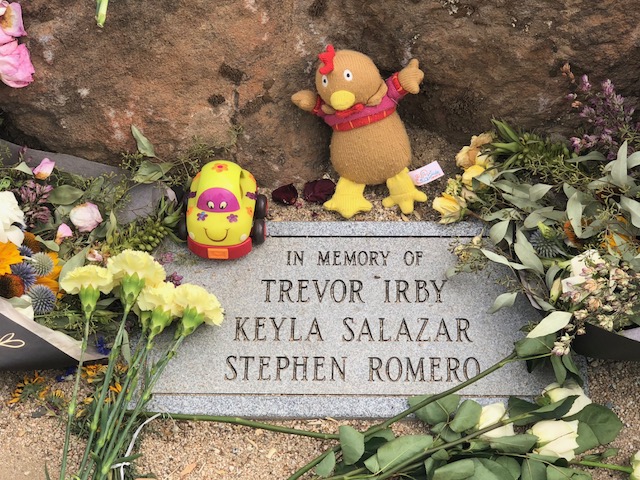 A plaque at a memorial at the site of last year’s Gilroy Garlic Festival shooting honors the victims who were killed.
Photo by Robert Airoldi

One year later, the people of the South Valley came together to remember and to heal.

Tuesday July 28 sadly marked the one-year anniversary of the Gilroy Garlic Festival mass shooting. Local people joined through online media or found their own personal ways to mourn their loss and continue the long process of grief. They remembered the men, women, and children running in terror as shots tore through the grounds at Christmas Hill Park. They remembered those 17 hurt by the flying bullets. They remembered those three whose young lives ended sadly too soon 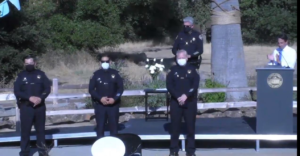 Inside the grounds of the 50-acre city park, a small garden memorial now stands where the mass shooting occurred. Three large stones represent the three young people who died in the incident. Stephen Romero, age 6; Keyla Salazar, age 13; and Trevor Deon Irby, age 25, were killed by gunshots. Seventeen posts of a wooden fence around the memorial represent the number of victims injured in the assault

One year after the shooting, about half an hour before the time when the tragedy took place, Santa Clara County District Attorney Jeff Rosen spoke in front of the garden to an invited group of dignitaries and members of the families of those who died. He spoke as part of the Rising Together memorial service. Nearly 400 viewers watched on a live online broadcast because the COVID-19 pandemic prevented a mass gathering. The event was sponsored by the Gilroy Strong Resiliency Center.

“One year ago today, we were having a day of joy, a day of community gathering, a day of tradition, a day of good food, a day of garlic, a day of fun, a day for Gilroy, and for our whole community,” he told them. “That day was ripped apart right here in this park. An act of evil tore the day apart. It only takes a minute to tear a day apart.”

The perpetrator, a 19-year-old Gilroy resident, used bolt cutters to break through a security fence on the northern end of the park shortly before 5:45 p.m. at the 2019 festival. Wearing a bullet-proof vest and armed with a WASR-10 semi-automatic rifle, he carried close to 300 rounds of ammunition. In less than 60 seconds, he randomly fired 39 rounds, striking 20 people and terrorizing thousands of festival guests and volunteers.

He could have maimed or murdered more people had it not been for three Gilroy police officers who ran toward the mayhem. Within a minute they fired at him. The perpetrator dropped to his knees, fell back then took his own life.

At the memorial the officers, Eric Cryar, a 23-year law enforcement veteran; Hugo Del Moral, a 17-year veteran; and Robert Basuino, a 13-year veteran of the Gilroy department, received medals of honor for their courage.

In the shooting’s aftermath, South Valley people came together at public gatherings to deal with the emotions of grief and shock through tears, hugs and prayers that expressed solidarity.

Not only first responders but ordinary Gilroyans stepped up to serve as heroes in that time of tragedy. One was a veteran who had not heard gunfire since his war service. By military instinct he leaped on nearby children and kept them safe from gunfire. The trauma brought up memories that induced his post-traumatic stress disorder.

Another hero was a festival volunteer assigned to watch over the kids in the play area. She barricaded and comforted other parents’ children, fearing all the while for the safety of her own son somewhere in the park.

One mother had a young son ten feet away from her when the shooting started. She had to make a split second decision whether or not to run to him. If she did, she might attract the shooter’s attention. She laid on the ground and reached out her hand to try to touch him, feeling the shoes of fleeing people running over her arm.

The chaos that summer Sunday afternoon lasted for about 25 minutes. Law enforcement officers tried to secure the scene and called for paramedics to assist the injured. Medic helicopters flew in to bring victims to area hospitals. The residents of the nearby neighborhood opened their doors to strangers who fled the festival and needed a place to find safety and comfort as they waited for their family or friends to pick them up.

At the shooting’s one-year anniversary by the park’s flagpoles, Gilroy Mayor Roland Velasco led a 15-minute ceremony where a GilroyStrong flag was raised in remembrance of the victims. He was joined by city council members and senior staff of the fire and police departments — all wearing masks and socially distancing. The public joined online.

“In the aftermath of this terrible and tragic incident, our community came together in solidarity and in support of everyone who suffered and experienced loss that tragic day,” Velasco said. “Although we would like to claim victory over the tragedy by posting another garlic festival, the global pandemic has other plans for us, and we must find victory in our own hearts and in our homes. We will claim victory each time we treat a neighbor with kindness, stand up for justice, and seek understanding. We claim victory and we seek more ways to make our community better for each other. “

The GilroyStrong flag represents the determination and resilience the community demonstrated in the past year, he said.

“This flag represents our collective spirit and desire to rise against senseless acts of violence,” he said. “Gilroy has heart. Time after time again we show up for each other, we care for each other and we support each other. And that’s what we did after the Garlic Festival incident.”

Law enforcement agents have not determined a motive for the shooting. Before the attack, the perpetrator had posted on his Instagram account a message promoting a book titled “Might is Right.”

It is considered by some a manifesto of white supremacy, suggesting the motive was hatred.

However, FBI investigators do not yet know his ideology. About 5:45 p.m. at the Rising Together memorial service, Rosen took a pause and said with a shaky voice:

“It was right around now the shots rang out in this park one year ago today, taking the lives of Steven, Trevor and Kayla, injuring dozens more and hurting this whole community.”