Editorial: Protect U.S. postal service for the sake of democracy

To reduce the danger of spreading the coronavirus by millions of Californians waiting in line in public places to vote, Gov. Gavin Newsom signed an executive order to make sure all registered voters in the Golden State will automatically be sent a vote-by-mail ballot to their homes.

The COVID-19 pandemic will cause far more Americans to vote by mail in this November’s general election than any previous year. Despite some politicians expressing their concern this may open the door to wide-spread fraudulent ballots being cast, over the years mail-in voting has proven to be a secure, reliable and trustworthy system.

There are safeguards that make voting by mail a more protected way to do your democratic duty than voting in person at a polling station. Overall, election fraud is rare in the United States — and this is especially true for voting by mail.

The conservative group The Heritage Foundation kept a database which listed about 1,200 allegations of voter fraud since the 2000 election, with 1,100 criminal convictions in two decades. Of those, 204 allegations, and 143 convictions, involved mail-in ballots, a tiny fraction of the roughly 250 million mail-in ballots cast during those two decades. The Washington Post found 31 cases of proven fraud for a billion votes from 2000-2014. Statistically, it is far more likely an individual will be struck by a lightning bolt than fraudulently impersonate another voter at the polls. 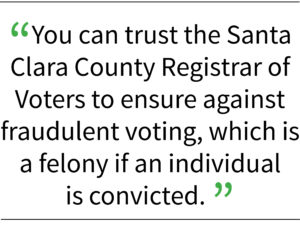 The likelihood of voter fraud is extremely rare in states where ballots are primarily delivered to the registrar of voters by mail. Voting by mail with the use of common standards is just as secure as in-person voting. But some citizens still feel nervous about the prospect of the 2020 election results. Officials in Santa Clara County’s Registrar of Voters are ensuring public confidence by being transparent and communicating their plans and preparations.

However, the public should also be aware that the results of the November vote may not be clear for days or even weeks. Because of the nearly certain increase in voting through the U.S. Postal Service, it will undoubtedly take longer for election workers to open, verify signatures, and count mail ballots than it does to run voting machines. This will most likely have an impact on the results of the presidential race because some states do not permit mail ballots to be opened until Election Day.

A slower mail service could also have a big impact in tabulating the count this fall. Many states require a ballot to arrive at an election office by Election Day, regardless of when it was put in the mail, in order to be counted. It’s estimated that at least 65,000 ballots were rejected during the 2020 primaries because they arrived too late.

The quality of the postal service in delivering the ballots might also be compromised in this November’s election because of recent changes made to the agency for what the Trump Administration describes as cost-cutting endeavors. We hope this will not disenfranchise voters who either fail to receive their ballot in time to vote (or don’t receive it at all), or it arrives too late at the registrar’s office to be counted.

Making these major changes to the postal systems so close to an election is a high-risk proposition. Already, delays in delivery this year have been caused when postal carriers have been unable to work during the COVID-19 pandemic. With the recent changes, the agency is now prohibiting overtime and requires postal workers to leave mail behind at processing plants if it would cause them to leave late.

Residents in Philadelphia have gone as long as three weeks without mail and postal workers said mail was piling up in that city’s post offices. Veterans and employees of the Department of Veterans Affairs have reported mail delays in fulfilling prescriptions. In April, some Wisconsin voters said they never received ballots they requested for a statewide election. This is an unacceptable way to provide a public service mandated in the United States Constitution.

You can trust the Santa Clara County Registrar of Voters to ensure against fraudulent voting, which is a felony if an individual is convicted (and will unlikely have any real impact on the results anyway). When a vote-by-mail ballot is received by election officials, the signature on the return envelope is compared to the signature on the voter registration card to ensure they match. To preserve the secrecy, the ballot is then separated from the envelope to be tallied.

We encourage all registered voters to cast their ballot by mail. Experts in epidemiology say voting from home is safer than going to a crowded public site. Let’s keep the people of Santa Clara County as healthy as possible. Voting by mail in the Nov. 3 election will help save lives.