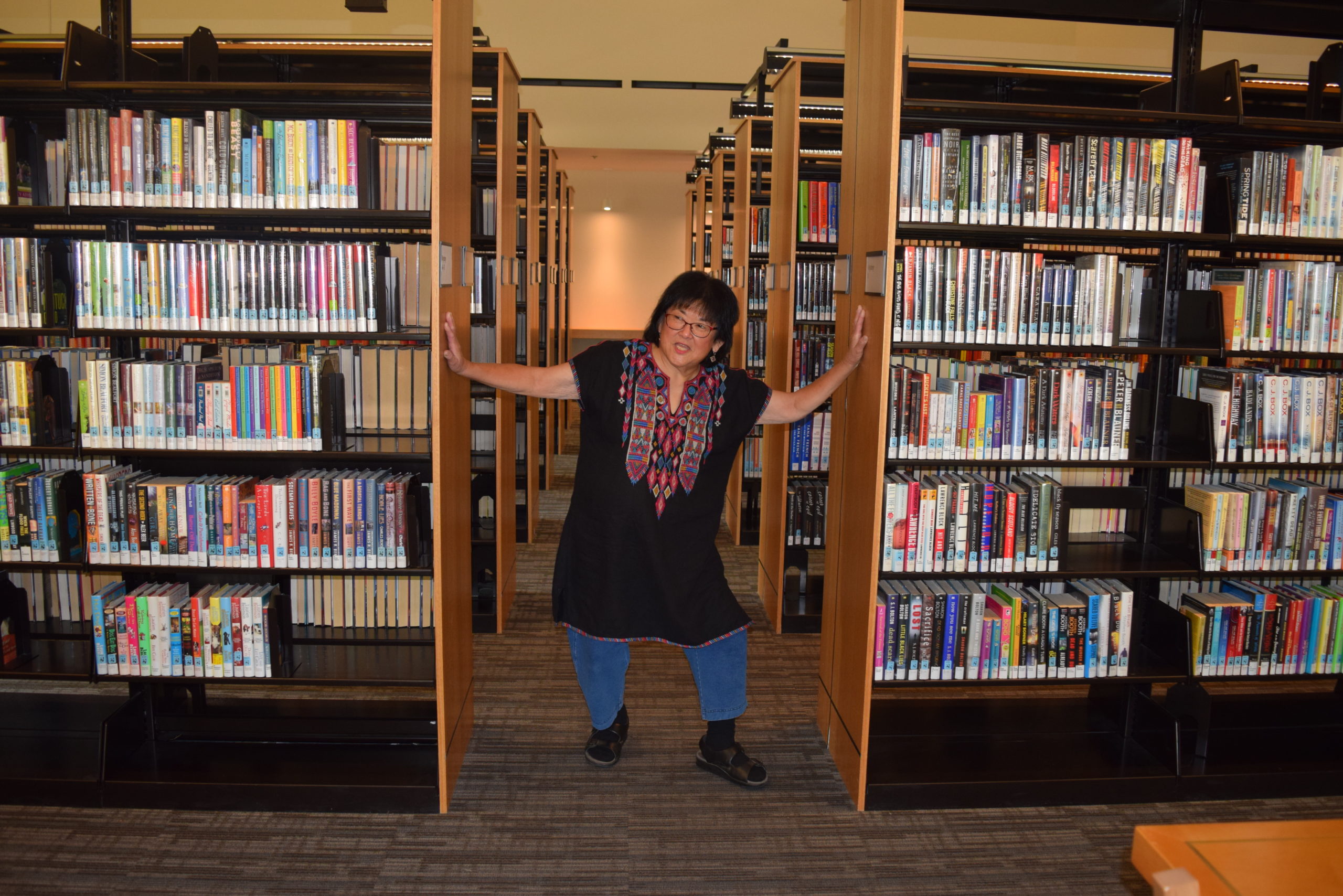 Photo by Robert Airoldi
Gilroy Librarian Lani Yoshimura is retiring Aug. 23 after more than half a century working in public libraries.

After working in public libraries for more than half a century, Lani Yoshimura has many memories from her time among the bookshelves. Providing the services that empowered South Valley people to transform their lives is one of the aspects of her career she is most proud of.

Yoshimura retired Aug. 23 to spend more time with her 100-year-old mother. Her longtime position as the Gilroy community librarian is now being filled by Casandra Wong, who transitioned into the role in August.

Among the accomplishments in her career, Yoshimura helped the Gilroy community open a new 53,500-square- foot library in 2012. It replaced the 12,500-square-foot library that opened in 1975. For her work over the years on this project and for her other involvements in the community, she received the Gilroy Chamber of Commerce Woman of the Year honor in 2012.

Yoshimura grew up in the small community of Colusa, a town of about 2,500 people along the Sacramento River. It reminded her of Gilroy, one reason she grew fond of working here.

Her family lived in a house about 100 feet from a farm labor camp, so she got to know the kids. At one point in her teenage years, she asked her dad to help her get a job working in the nearby farms because she wanted to know what that kind of life was like. At sunrise, Yoshimura would drive to the fields and spend long hours picking produce. One day “la migra” (a slang term for immigration officials) came. She suddenly found herself left alone with only her boss as all the other field workers mysteriously vanished.

“I thought, ‘Oh my gosh, where did everybody go?’” she said. “Everybody had disappeared into the field.”

That experience gave her a personal perspective of the struggles immigrants often face in America. It has shaped her career as a librarian in serving those in need, including the homeless and financially-struggling families.

In the evenings, after a day laboring in the fields was over, Yoshimura spent time working in the two public libraries in Colusa doing various projects.

“It was a long day,” she said. “I think that’s where I kind of got my start with those two libraries across the street from each other. There’s nothing to do in a small town.”

After graduating from high school, she attended a community college for two years before she transferred to the University of California, Santa Cruz, where she studied as a literature major.

To become a librarian, she needed to get her master’s degree in library science. There were a limited number of accredited schools and she considered Rutgers University or the University of New York. At the last minute, she chose the University of Hawaii in Honolulu.

“They had just opened up their new library school, and were desperate to get people from the mainland to go there,” Yoshimura said. “They offered me a scholarship. I was lucky to live in the East-West Center on the campus. There were people from 50 different nations there. That was in itself a great learning experience.”

She later transferred to San Jose State University, earning her master’s degree at its internationally renowned library school. As she was finishing her degree she found a job working as a clerk for the San Jose Public Library System. They stationed her at the small Alviso Library where she got to know the people who lived on the boats in the community along the southern tip of San Francisco Bay.

After earning her master’s degree in 1974, she was hired by the Santa Clara County Library District. She worked in various branches including Cupertino and Campbell. In 1975, she was transferred to the Gilroy Library. Its building had held its grand opening six months before she arrived. She worked there for several years until she was transferred to Campbell to serve as its community librarian. In 1982, she found herself back in Gilroy as the community librarian. She has remained in that position ever since. She has worked for the county library district for 46 years, 41 of them in Gilroy.

Over the years, Yoshimura has seen the city of Gilroy grow from about 10,000 to more than 55,000 people. When she originally came to Gilroy, she realized the building would not be able to provide for this rapidly expanding growth. The city would eventually need to build a much bigger building.

As the community librarian, she set in motion the political campaign to raise the funds for a new structure to replace the overcrowded and outdated library. A group was formed to campaign, and they figured Measure F had a 50/50 chance of winning the two-thirds vote for the bond to pass, providing $37 million for the new library. The night of the November 2008 election as the results came in, newspapers projected the bond had lost. But the Gilroy community librarian knew it might still get the public’s support as absentee ballots were counted. She called the election headquarters the next day and learned it had indeed passed with 69 percent voter approval.

Her desire to help people goes beyond libraries. In the 1980s she worked with other South Valley women to develop the nonprofit Women’s Service to assist local women facing crises in their lives. One project Yoshimura is especially proud of is helping to develop a home in the county where women facing domestic violence could find protection.

In her retirement years, Yoshimura will still remain active with volunteering and travel. She will stay on the board of the South County Collaborative and remain active with the Friends of the Gilroy Library. She also plans to do some writing, including a history of the first Japanese who settled in California.

Besides the construction of a two-story library building that is the pride of the community, Yoshimura sees her greatest accomplishments lie in helping the men, women and children of Gilroy find the resources they need to improve the quality of their lives.

“For me it’s the interactions where I can see we made subtle but incredible changes in someone’s life,” she said.

Yoshimura recalls the heart-touching story of a Gilroy woman who worked long hours at one of the restaurants in town as a dishwasher. She couldn’t read or write and the kids were getting to an age where they were asking her for the help they needed to do their homework. The woman and her husband talked about how to solve this problem and he suggested that she take advantage of the library’s literacy program.

“She was so motivated that within a month and a half, she ceased being a dishwasher and became a waitress because she could now write a ticket for orders,” Yoshimura said. “And that increased her salary because she got tips.”

The woman’s husband was supportive and encouraged her to continue developing her literacy skills through the library reading program, she said. She was so motivated that she eventually took the GED (general education exam) and passed it and soon after started going to college. Years later, the woman’s kids had grown up and had children of their own. Yoshimura recalled with a glow in her eyes how the woman brought her little grandchildren into the Gilroy library and helped them apply for library cards of their own to develop their own literacy skills.

“The circle was made complete,” Yoshimura said.