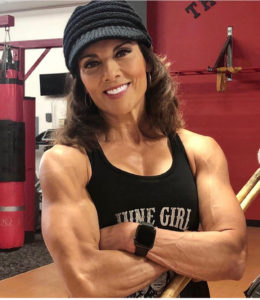 Uncertainty and cynicism all too often trail us throughout our teenage years. Linda Pulido found confidence in a roundabout way through martial arts, although she began learning it for the wrong reasons.

“I was not a confident person,” Linda, 52, told me recently in a virtual interview. “If you looked at me you would say that girl looks strong because I was really into sports, but I was lacking inner strength.”

Hanging out with the wrong crowd in high school, she joined martial arts to defend herself during the frequent fights in which she found herself.

“It ended up being the right decision because I taught myself to have respect for myself and respect for others,” Linda recalled. 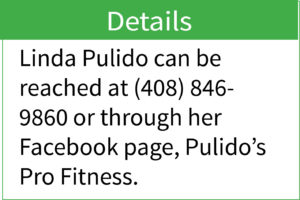 Today, she holds 29 world champion titles in taekwondo, Muay Thai, and in Filipino martial arts, and has traveled around the world competing. She is the owner and lead instructor of Pulido’s Pro Fitness in Gilroy.

She has been teaching for 30 years and doing martial arts and competing for the past 36 years.

“I’m not doing it for any other reason than challenging myself,” she said.

As she improved in martial arts, she learned an important lesson — not to give up, which she has applied to her life as well. 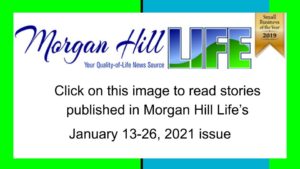 “I thought I needed to share this. I need to become a leader. I need to teach people that nothing in this life is impossible. You have to pursue it and not give up,” Linda said.

She observed that the young people she was teaching started doing better academically and socially, and women were becoming more empowered as they learned to defend themselves.

“That kind of confidence helps you in every aspect of life — at work, in a relationship,” Linda said. “Having that confidence is the most powerful thing ever.”

Before the pandemic, 125 students were enrolled in her taekwondo classes and a group of Filipino martial artists from her studio we’re prepping for world championships. Linda also was training to defend five of her titles.

She continues to teach classes online and in person, outside and while socially distanced. “I feel like I’m busier than ever because I’m doing all of it,” she said.

She also continues to train. She recalls meeting one of her teachers in 2004, when a Filipino man came into her studio and approached her, offering to train her in stick fighting.

“I fell in love with stick fighting,” she said. Two years later, she won her first world championship in a single stick competition.

“The feeling was just amazing,” she said.

She hopes to defend her titles before she’s too old to compete. “That won’t happen!” she said quickly, noting that she has friends in their 60s who are competing.

“I never say I’m going to win,” Linda said. “I go into it saying, ‘I’m going to work hard and I’m trying to get better than myself.’”

When she’s not working, she enjoys driving over the hill and walking by the beach, returning home a “different person.”

“That’s my time. I walk my five miles looking at the water. That’s when I do my best thinking,” Linda said.

Her advice to young women would be to never give up on something that you love because it could turn into a career and it won’t feel like work.

“Never think that you can’t do it. Never stop pursuing,” she said.

Linda said she still receives emails from former students thanking her and letting her know that they never gave up because of what she taught them.

“That’s really gratifying to me. That’s what keeps me going, especially during this pandemic.”