The South Valley Symphony will celebrate 40 years of bringing the joy of music to the people of the Morgan Hill region with the opening of its 2013-2014 concert season Oct. 12. 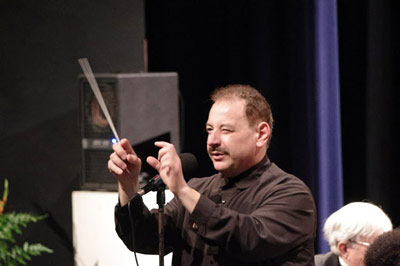 The symphony will open its first concert by performing Brahms’ Academic Festival Overture, the first piece Quartuccio conducted at his first South Valley Symphony concert when he joined as conductor in 2006. All four concerts this season will be held at either the Gavilan College theater in Gilroy or at the Mission San Juan Bautista.

Many of the orchestra’s musicians are Morgan Hill residents, Quartuccio said, adding that the symphony has long considered finding a venue to perform at in Morgan Hill.

“I think there’s a real opportunity here,” he said. “It’s just a question of actually getting people in the same room together. We have to stop, pause, have a conversation and make something happen. We would like to be able to perform in other places so we can bring more people into our family, and that’s what our main objective is going into our 40th anniversary.”

Many members of the symphony have been involved in school outreach programs in Morgan Hill, such as performing at the annual music fest barbecue put on for students at Jackson Academy of Music and Math. During its last concert season, the symphony invited Sobrato High School senior Chris Niemann, a music composer, to conduct an orchestra piece the student wrote.

“Another thing we would like to do with schools in regards to the concerts is to find some backing or funding to bus students to our opening nights and let them hear the music being played,” Quartuccio said. “We’d also like to do some preliminary educational work to prep them so they can enjoy it.”

The conductor sees a strong dedication among the people involved with the symphony that has kept it alive for four decades. Some of the musicians still performing have been with the South Valley Symphony from day one, he said.

“There’s an incredible amount of love and loyalty toward keeping it alive for the community through all kinds of economic downturns and complications of things that would normally take an orchestra down,” Quartuccio said. “There’s a core of people who really, really love what they’re doing here, and that radiates outward. Community orchestras, they can come and they go, but this one, after 40 years, has maintained concert programs every year during its existence in an area where we don’t have many musicians compared with San Jose and San Francisco.”

Quartuccio says a lot of thought is put into choosing the pieces performed at each concert. The time of the year and what audiences will want is a major consideration. So are the orchestra’s abilities and the acoustics of the venue.

“It’s like picking a good menu for a wedding or for a large celebration,” he said. “It’s literally like food. I think in terms of what is acidic, what balances that with something that is sweet and sour. All of the different flavors come together to create a package.”