Student of the Year Joshua Toch strives to succeed 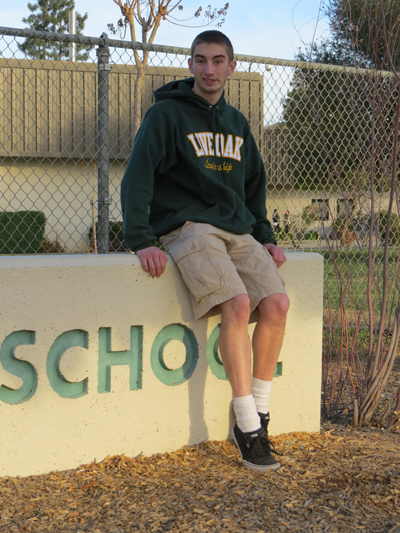 Photo by Robert Airoldi
Joshua Toch is the Chamber of Commerce’s 2014 Student of the Year.

Joshua Toch has overcome many hurdles in his young life, as have most high school students, struggling to get good grades and fit in. But unlike most students, Toch has met the President of the United States, overcome bullying and is living with cerebral palsy.

And for that and many other accomplishments, Toch was named the 2014 Student of the Year by the Chamber of Commerce and will be honored Jan. 25. He was surprised with the announcement Nov. 20 in his AP Calculus class taught by Kristopher Boursier who nominated him. That morning, Superintendent Steve Betando, Principal Gary Webb, Chamber of Commerce CEO John Horner and Chamber Board President Rich Firato, family members and others walked in and told him of his honor.

“It was a shock and a surprise,” Toch said. “I kind of knew something was up when my dad and grandmother showed up, but I wasn’t sure what it was.” He said he was overwhelmed by the sheer number of people who were there. “I was so overjoyed to have that experience and this honor.”

The 17-year-old senior with a 4.5 grade-point-average hopes one day to attend college and study biomedical engineering — he’s applied to 11, including seven UCs, Cal Poly, San Jose State University, USC and Stanford, but said Stanford is his dream school.

“I don’t want to leave California,” he said, referring to his college choices. “California has good schools. I don’t see the point in leaving and having to pay every time I want to come home.”

It’s that logic and down-to-earth attitude that impressed Boursier.

“I’ve known him for a couple of years, and it’s always a pleasure to see him — he’s very upbeat and positive, and when he feels that something needs to be corrected he does something about it,” Boursier said.

In the classroom, he is an attentive student who stays on track, volunteers to present problems, especially when there are extra credit points involved, and always helps out other students who are struggling with material, she added. “As a person, Josh does not let anything stand between him and his goals.” 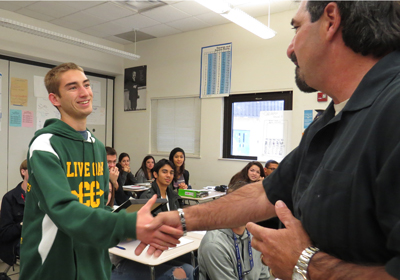 One of those goals was to become one of 98 representatives from 49 states to attend the American Legion Boys Nation 2013 annual conference in Washington, D.C., where some of the country’s most promising young leaders received an education on the structure and function of the federal government. Last summer he met that goal and also spent time with President Barack Obama, Sen. Diane Feinstein, and other senior officials.

Another goal was to start an anti-bullying program. Toch is the vice president of the Associated Student Body and co-president of the Interact Club, a Rotary Club for high school students. He’s also a member of the cross country team and has manned the sound board in the high school theater for the past two years. But it’s his work with the anti-bullying program called “Mind Before Mouth” he’s most proud of.

Josh describes himself as a “really big anti-bullying advocate,” and he helped pen a bill that may someday influence the conviction of bullies in a court of law. During last summer’s visit to the White House, he met Feinstein. The two shook hands and talked specifically about how much she loved his cyber-bullying bill.

Born with cerebral palsy, Toch has a slight speech impediment. “I live with it now,” he said. “I used to want to hide it, but it was too much effort. Now, I tell the world about it.”

He said he was bullied as a freshman and two years ago began talking about putting a program together. Last summer, he started the program and now has five people who join him in talking to students and telling their stories, including the boy who once bullied him.
“We cover the whole spectrum of what it is to be a teenager,” he said. “Our message is ‘you’re not alone and there is help.’” Their next speaking engagement will be early next year at a Gilroy middle school.

His father Randy Toch, an attorney with Rusconi, Foster & Thomas, A.P.C., said he’s beyond proud of his son. “I thought of how far he’s come and how much he’s accomplished and I was even more proud,” he said. “He’s such an amazing kid.”