Eatery also sells Vietnamese coffees, among them is a strong iced coffee with a double shot of espresso 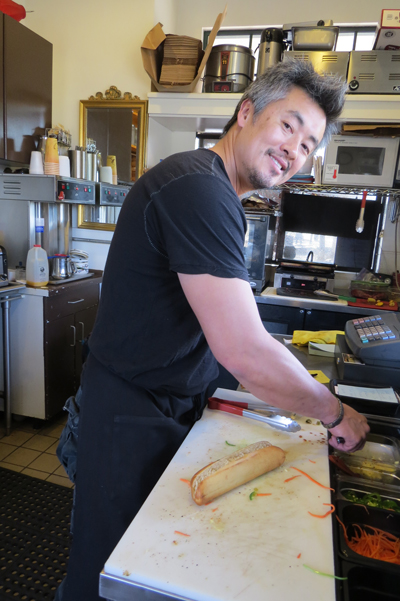 Photo by Marty Cheek
Jonty’s owner John Nguyen prepares a sandwich in his shop near the train station.

Jonty’s Vietnamese Eatery has been around for less than a year, but the downtown Morgan Hill restaurant is developing a loyal following of patrons. Among them is Joe Serpa, a long-time Morgan Hill resident who shows up at least twice a week to get lunch, especially his favorite order, the lemongrass pork sandwich.

“Their sandwiches are really good, and their prices are right,” Serpa said. “They have a great flavor with carrots and the cucumbers and they have a little kick to them.”

After 14 years working in Silicon Valley’s technology industry, John Nguyen decided to start up Jonty’s at the small building at the railroad track end of the Third Street Promenade.

Providing only patio seating near the Waiting for the Train statue of Hiram Morgan Hill and his family, the eatery has a great view of El Toro Mountain. Nguyen opened Jonty’s in April 2013, naming it after his daughter Jonty who is now a 9-year-old student at Nordstrom Elementary School.

“She’s a really good eater,” he said, explaining the selection of the restaurant’s name. “She’s picky about her food and what she likes she really enjoys.”

People come mostly to Jonty’s for Nguyen’s made-on-the-spot fresh sandwiches which cost $4.50. “People like the sandwiches. We have a pork belly which is probably the most popular followed by a steak,” he said. “We also have a lemongrass sandwich which is more toward the healthy side for people who want their sandwiches a lot leaner.”

Other sandwich options include cha lua (a Vietnamese pork ham) and tofu. The sandwiches come in a French roll with garlic, aioli, cilantro, cucumber, jalapeno and pickled carrots. Jonty’s also offers its customers rice plates and organic red leaf lettuce salads with the same “protein options” it provides in its sandwiches. Nguyen makes his own zesty lemon-honey dressing for the salads.

Although there are some traditional Vietnamese foods at Jonty’s, Nguyen describes his culinary style as a mixture of different cultural influences.

“It is made with the robusta bean as opposed to the Arabica bean and that’s why it has a stronger flavor and more caffeine, probably twice as much caffeine as the other kind,” he said. “It’s slow dripped through a Vietnamese filter and added to sweetened condensed milk. It tastes really sweet and is a real pick-me-up. A lot of people come here for their morning coffee.”

Nguyen believes in providing customers with a unique flavor experience with his sandwiches, rice bowls and salads. “If you’re just going to open up another sandwich shop and it’s not much different from any other sandwich shop, what’s the point?” he said. “People might try it, but there would really be no reason that they would want to come back because it’s just another sandwich shop.”