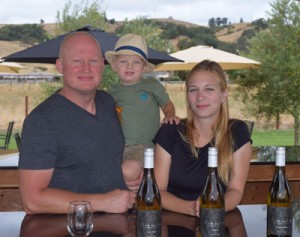 For their first big adventure as a newlywed couple in 2009, Todd and Kim Engelhardt decided to dive head first into the South Valley wine industry. Living in San Francisco, they took the daring step to move to San Martin where they found a five-acre piece of land north of the community. It proved to be the perfect place for their newly opened Lion Ranch Vineyard & Winery.

One of the first things they did was to search out their property’s history. In Santa Clara County title records from long ago, they found out that 6,000 acres of the land were once known as the Lion Ranch, named after a French man whose last name was Lion. Monsieur Lion’s moniker seemed to be the perfect name to christen their winery, the couple decided.

Over time, the Engelhardts discovered what it takes to grow grapes for good-quality Lion Ranch wine. Work began clearing, leveling, understanding water flow, and controlling weeds. Purchasing a tractor really drove home the fact in the Engelhardt’s minds that they were out of the cosmopolitan city and on a farming adventure.

Kim, 33, switched careers and began working at Sarah’s Vineyard, apprenticing in the vineyard and winery at every opportunity she could find.
“I worked every harvest and learned everything I could,” she said.

While Kim gained the “hands on” experience from grapevines to sales, Todd, 41, began learning the science aspect of winemaking from reading textbooks, articles and blogs. They both took classes at the University of California, Davis, to refine their skills. Finding themselves in a welcoming community of farmers and winemakers, they participated in study groups based on winemaking education courses. Hearing experiences from local experts, they quickly learned much about the industry and process.

“If you have a question, you can ask any other winemaker and you’ll get an answer,” Todd said. “We’ve been more lucky than anything.”

Now Lion Ranch is producing Rhone varietal whites — Viognier, Granache Blanc, Marsanne, Roussanne, Picpoul Blanc and a Lion’s Share white blend. In 2013 they moved to a property on the corner of San Martin Avenue and Santa Teresa Boulevard where they will at some point when the drought ends plant about 3 1/2 acres of red wine grapes. They harvested their first wines in 2013 just a month after their son Jack was born.

The couple met in Phoenix, Ariz., in 2006 while with a group of mutual friends after a baseball game. They moved a year later to San Francisco where Kim worked as a social worker. Today Todd is an emergency room physician at El Camino Hospital in Mountain View. And while Kim now works full time at the winery, Todd continues his work. “I love my job there,” he said. “I have a lot of fun at work.”

Traveling to France in 2009 and touring the European country from the Cote d’ Azure to Provence to the Rhone to Lyon, they fell in love with the Viognier grape. Returning to the states, they began tasting every domestically-made Viognier and many other white Rhone varietals. Their original estate vineyard was planted in 2011. That was when they acquired the property at Santa Teresa Boulevard and San Martin Avenue in 2013 allowing them the space to create the wines they envisioned.

“We tended every single plant of our property with our own hands, with occasional help from willing family and friends,” Kim said. “All 4,000-plus plants were handled repeatedly as they were trained, pruned, trained, pruned, over and over. Raising grapes takes a lot of determination, commitment, patience and backbreaking labor. It was hot, dusty, dirty work … with beautiful, delicious rewards.”

The couple built a covered wine tasting area. It has two bars, a small stage for musicians and a bocce ball court and set up tables and chairs for patrons to sit and enjoy the wines.

“We don’t want to work too hard,” Kim said. “With wines, I think about sitting and relaxing. We’re about staying small.”