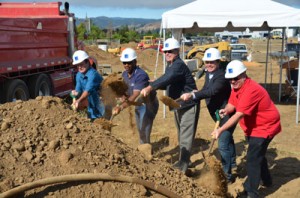 The Morgan Hill Chamber of Commerce staff, ambassadors and board members, along with Mayor Steve Tate and Councilman Rich Constantine, joined representatives from La Quinta Inn & Suites for a groundbreaking for the new hotel that will be located on Condit Road, south of the Ford Store.

The hotel is owned by StonePark Capital principals Andrew Firestone and Jess Parker. Firestone was notably absent from the ceremonies as he had jury duty. “He would have preferred to be at the groundbreaking,” Parker told the audience laughingly.

StonePark Capital is a Santa Barbara-based hospitality firm that focuses on the acquisition and development of select service hotels. The new Morgan Hill La Quinta hotel is expected to open in February. It’s the third hotel project for the company, with other sites in Santa Barbara and San Luis Obispo.