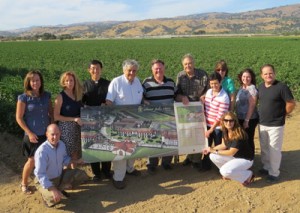 Photo by Marty Cheek
Organizers of the St. John XXIII College Preparatory High School campaign display a banner on the southwest corner of the property.

For more than a decade, parishioners of Saint Catherine Church and Saint Mary Church have dreamed of one day having their children attend a Catholic high school in Morgan Hill. That goal gained renewed energy July 8 at Bubbles Wine Bar when organizers announced that the school finally has an official name — St. John XXIII College Preparatory High School. The moniker will let organizers begin the campaign of raising $30 million to break ground for the campus’s construction possibly in 2018.

Chuck Berghoff, a member of the project’s fund-raising committee, said St. John XXIII began with several local residents who saw a need for a Catholic college preparatory school to educate local young people. Among them was farmer George Chiala who hoped to see his grandchildren attend the high school.

“George was the brainchild of this school many years ago,” Berghoff said. “One of the challenges that we have is it’s been so long in the making that a lot of people in town have heard about it but they assumed that it would never happen. Now it’s happening.”

As more residents of the South Valley region learn that the project is now moving ahead into high gear, there will be more support both financially and on a volunteer basis, said Shelly Paiva, who is also on the fund-raising committee.

“We have a lot of people in this community who have heard about it a long time ago, and now we’re bringing people together to let them know that this is really happening,” she said. “We’ve got great support from the diocese, and now we have great support now that we have a name.” 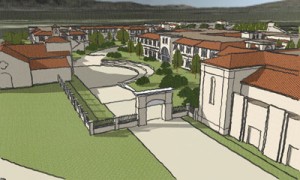 More than 450 students in the Morgan Hill region are commuting outside of this area to get an education – with abut 250 going to Catholic high schools and another 200 attending other private schools. Their daily time on the road can be as long as three hours, so there is a real need for a local college preparatory school in Morgan Hill, Paiva said. Her own son Lincoln is a second grader at St Mary School in Gilroy, so she hopes to see him attend St. John XXIII College Preparatory one day.

The first new Catholic high school to be built in the Diocese of San Jose in more than 50 years, the St. John XXIII project is well underway with the purchase several years ago of 40 acres of land in the Southeast Quadrant of Morgan Hill. 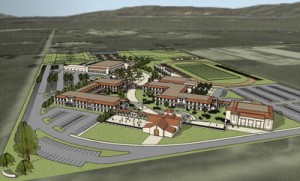 A concept drawing of a bird’s-eye view of the proposed high school. Courtesy Scott Higgins

The property is currently a farm field with a farmhouse on it. It’s now in unincorporated county land but is expected to be annexed by the city by year’s end. When built, the entrance to the school will be at the corner of Tennant and Murphy avenues. The architectural design will include LEED-certified environmentally-friendly buildings.

About $5 million has been promised already by donors for the project, and organizers believe that $25 million will be raised in two and a half years to begin the first of three phases.

The campus will eventually accommodate 600 students and include 27 classrooms, two science labs, a multi-media lecture room, and an administration building. Fund-raising will include naming opportunities of various buildings that are planned such as classrooms, a football stadium, a performing arts center and a donor wall. For example, to name a classroom after a family or a business requires a donation of $150,000.

“Right now, we’re in the kick-off phase because we were waiting to find out where we were in some of the approvals with the land use and things like that,” Paiva said. “That’s been going well so we’re now really pushing the fund-raising to get the money to build the high school.”

Father Steve Kim, a teacher at St. Francis High School in Mountain View, will serve as the liaison between the diocese and the campaign organizers for the high school project. Raising the funds over the next several years will be the key to getting the school built, he said at the Bubbles event.

“The practicality is to form a board of trustees to make it work and serve as an advisory board,” he said. “And along with our fund-raising campaign, we have a mission and a vision to go along with it.”

The organizers will also hire a professional development person who knows how to do fund-raising and other aspects of the project.
How long it will take to raise $25 million depends on how supportive the community is for a new high school in Morgan Hill, he said.

“They say 2018, that’s what the brochure says,” Kim said. “But who knows? It could be tomorrow if we have one person who will write a check. Or it might never happen. I’m being realistic. But we’ll do what we can, do our part, pray and trust in God and hope for the best.”

Kim sees several reasons to build the high school in Morgan Hill. One is to help students who might be in families who are financially struggling but want the opportunity for a Catholic education.

“It’s going to improve the community and also raise awareness of areas in Morgan Hill that people don’t like to talk about,” he said. “There are nice areas in the hills, but there are also trailers that nobody talks about. So why can’t we provide them with the best education possible? Give them opportunities.”

The second reason is to build the “whole person,” he said.

The choice of the name St. John XXIII is important to create the spirit of the high school and help in the fundraising aspects of the project. As pope from October 1958 to June 1963, John XXIII is historically considered a reformer of the Roman Catholic Church, calling the Second Vatican Council (or Vatican II) which lasted from 1962 to 1965 and addressed the relationship the church had with the modern world.

“The key word he used was ‘aggiornamento’ which is ‘updating,’” Kim said of John XXIII. “We’ve been doing this a long time, let’s update. I think education in Morgan Hill needs updating. Not that it was bad before, but we need to equip people for the 21st century — mind, body, and spirit. This will be a benefit for Morgan Hill.”

In his role as liaison, Kim said he will connect with all groups of the South Valley community who might wish to be involved in the project. The school will foster a culture of inclusiveness.

The school has received Morgan Hill Mayor Steve Tate’s support, who said in his annual state of the city address that he wants to see the high school built. Gilroy Mayor Don Gage also expressed support for the school.

Berghoff said the announcement of the name John XXIII will help build the brand of the school and make it more real for people, providing more traction in fundraising.

Because of the location, organizers have approval from the city to first build classrooms and labs for students. It will open with one freshmen class of 125 students, and each subsequent year will add 150 more freshmen until the capacity of 600 students is met in five years.

Through an agreement with the city, students will have access to the sporting facilities east of Highway 101 on Condit Road including the Aquatics Center and the soccer fields in the Outdoor Sports Center, Chiala said.

“Day one, our freshman class will have athletics,” he said.

A big hurdle the school still faces is getting LAFCO (Local Area Formation Commission) of Santa Clara County’s approval to incorporate the land into the city, but Chiala said he thinks they have the support at LAFCO to achieve this.

During the fundraising, an endowment program will be set up to provide scholarships for students in low-income brackets, he said. This scholarship program was part of the agreement with the Diocese of San Jose to build the school, he said. The diocese will run the school.

“That’s really a big advantage because we’ll have their board of education and we’ll have their ability to hire teachers. It’s a firm commitment by them,” Chiala said. “Now we’ve just got to make it happen. We’re here now. The property is purchased it’s all paid for. Now it’s time to raise the money.”