Three days of cooking competitions were a big hit with attendees 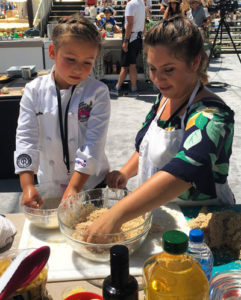 Foodies and families came to Christmas Hill Park from near and far for the 40th annual Gilroy Garlic Festival.

The annual celebration of the glory of garlic included traditional favorites such as the mouth-watering dishes from Gourmet Alley that have been a staple since the inaugural festival in 1979. This year saw the introduction of the first-ever signature cocktail, the Garlic Festival Mule. It proved so popular that it sold out during the three-day event.

“We had a great, easy-going crowd of garlic lovers enjoying garlicky gourmet food and live music — as well as new experiences like the Electric Clove Dance Tent and the Garlic Festival Mule cocktail,” he said.

Competition in concocting dishes using the stinking rose as an ingredient entertained crowds who gathered at the Challenge Butter Cook-Off Stage to witness the amateur and professional chefs put together their ingredients for savory fare.

Six-year-old Addyson Dell won the inaugural Garlic Chef Jr. competition. She wowed the judges with her Garlic Mac N Cheese with Crispy Garlic Chicken Tenders and Roasted Asparagus. As the winner, she went home with a new notebook computer valued at $500 — and ultimate bragging rights.

Hosted by MasterChef Season 7 Winner Shaun O’Neale, this new event required each child-chef contestant to create one baked or grilled dish containing at least six cloves of garlic. A panel of expert judges evaluated each dish for taste, appearance, creativity, and use of garlic.

Contestants in the Kansas City BBQ Society (KCBS) sanctioned event competed in five categories (Chicken, Pork Ribs, Pork Shoulder, Beef Brisket, and “Anything Goes with Garlic”), which were evaluated by a panel of KCBS judges. Festival guests who sampled the BBQ fare also voted to determine the People’s Choice award for each category.

John Campbell and Morgan Sanders from AMR Santa Clara County were the victors for the second year in a row in the Gilroy Garlic Festival Champions for Charity cooking challenge on Friday, July 27. It featured four teams of local first responders and military heroes competing to win $3,000 for their favorite charity. AMR Santa Clara County will be donating their winnings to Alzheimer’s Association.

The teams had to prepare dishes in three elimination rounds: Appetizer, Entrée, and Dessert. The other teams included chefs from the South Santa Clara County Fire/CAL Fire, San Jose Fire Department, and the U.S. Army.