The 19-member cast ranging in ages 13 to 18 comes from Morgan Hill, Gilroy, Hollister and San Jose

When Andy Gonzalez came home after auditioning for “Godspell,” the South Valley Civic Theatre’s teen musical show that opens Feb. 8, his mother asked him how it went. It turned out her prayers were answered.

“I’m not too strongly Catholic, but my mother is,” said the 18-year-old Gavilan Community College student. “So she asked what part I got in the show. And I said, ‘Um, Jesus.’ And she goes ‘Jesus! We’re going to have to see the show.’ She was very excited.” 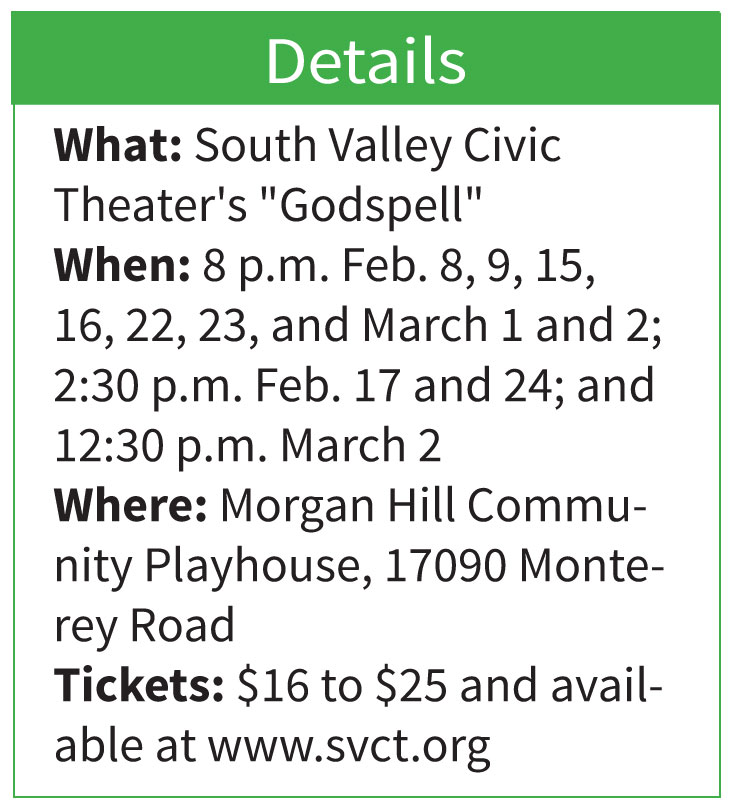 A favorite of community theater, “Godspell” first opened off-Broadway in 1971. Composed by Stephen Schwartz with the book by John-Michael Tebelak, the musical tells the story of Jesus teaching his followers using a series of parables from the Gospels of Matthew, Luke and John. The parables are told using a variety of musical genres, including pop, folk rock, gospel, hymns, and vaudeville.

Gonzalez’s portrayal of Jesus on the stage will show an “easy-going and fun-loving” side, he said.

“Since the show is so flexible, you can go any direction,” he said. “You can do a funny Jesus or you can do it showing his serious side. But since we are such a tight group, I feel like I’m just hanging out with my buddies and going through my teachings and trying to spread a message of love and peace.”

SVCT has produced “Godspell” twice before. The show was selected for the nonprofit theater group’s 50th anniversary season because of its popularity in the past performances, said Michelle Griffin who is producing the musical with Adrianne Wilkinson and Joy Reynolds. Her daughter, Megan Griffin, is the show’s director.

“It has amazing music,” Michelle said. “Even some of the songs went on to become top hits like ‘Day by Day’ and ‘Prepare Ye.’ They’re songs that people recognize.”

Doing research for show, the Griffins discovered the interesting origin of how “Godspell” came to be created. Tebelak was a hippie in the 1960s who grew up enjoying performing in the theater but also felt a calling to be a Methodist minister.

“He did not feel terribly welcomed in his church because of his long hair and ratty appearance,” Michelle said. “He had this inspiration to write this show to sort of bring to a different audience the message of Jesus.”

The show got its start in 1970 as Tebelak’s master’s thesis project at Carnegie Mellon University, according to Music Theater International.

His original version was performed by students from Carnegie Mellon’s Music Department. Tebelak directed the show, maintaining much of the original student cast, for a two-week, 10-performance run at La MaMa Experimental Theatre Club, which opened Feb. 24, 1971.

The student actor version of “Godspell” was seen by professional producers who liked the concept so much, they decided to transfer the show to off-Broadway and hired Schwartz to re-score the music.

The SVCT version of “Godspell” is a version of the modernized Broadway revival which opened Oct. 13, 2011 and played through June 24, 2012. It will be inclusive in representing the various religious beliefs of the South Valley, Michelle said.

“We have  a cast with many faiths. We have Jewish and Mormon actors as well as Catholics,” she said. “We made (the show) a safe place where we decided we want to tell the story and not proselytize to the kids. Actually, I think that has made it turn out very well because we have one of the closest casts I have ever seen. It’s turning out to be a very tight show and we’re very happy with it.”

The 19-member cast ranging in ages 13 to 18 comes from Morgan Hill, Gilroy, Hollister and San Jose. They perform on a stage set that is very simple, a playground swing and slide placed in front of a chain-link fence.

“The actors are very mature and every single one of them is on stage the entire show,” Megan said. “So they have a lot of material they’re working on whether they’re saying their lines or up there doing their blocking and choreography. They’re impressive because they can hang. It’s not easy material.”

Even though the show has a hippie-era feel to it, the message of love and tolerance is one that resonates through the ages, she said.

“The story is basically just Jesus’s re-telling the parables with some of his disciples and go through his whole journey and his teachings,” she said. “At the end of the show, it leads to the Last Supper where Judas betrays Jesus. We’re actually going to do a little mini-Passion play in the show where there’s a crucifixion and a resurrection. There are some very moving moments at the end of the show.”

SVCT encourages all religious faiths in the region to consider taking their youth groups and other members to see the performances of “Godspell,” Michelle said. Group ticket sale discounts are available.

“It’s a really good show to experience with other people who share your same sense of core beliefs,” she said.  “It tends to sometimes lean a little clownish, and some people might take it as being disrespectful, but we are making sure that we’re doing a very reverent productions.”

The upbeat music, dancing, and wise-cracks made by Jesus and the disciples will appeal to a modern audience, Megan said.

“There’s definitely a lot of light, funny moments in the show,” she said.