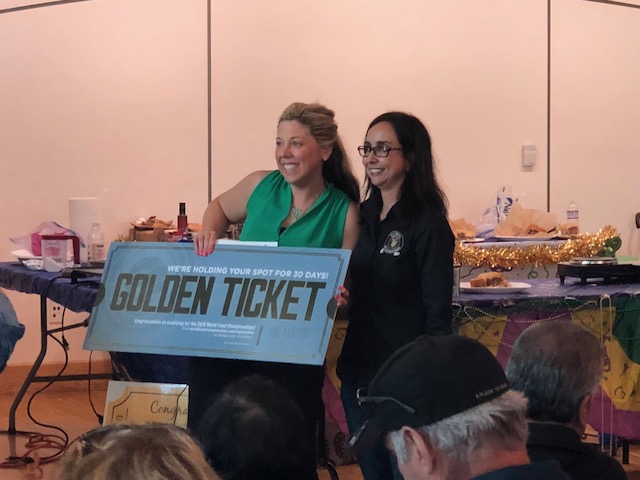 Dawnie Lynn has no need to be ashamed of her Walk of Shame Burger. The decadent breakfast concoction just might help her win a $100,000 prize. 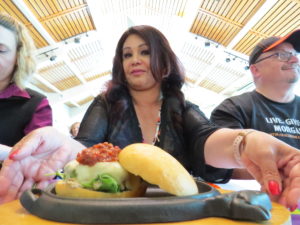 Lynn received a $1,000 check and a “golden ticket” from her win which allows her to go to Dallas in October and compete in the World Food Championships. This contest has the biggest payout in food sport history — a $350,000 prize purse for various categories. The overall winner will receive $100,000. 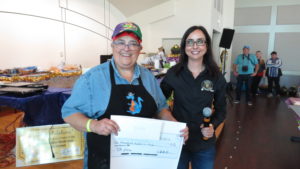 Lynn found out about the Mardi Gras’s cooking contest in an issue of Morgan Hill Life. On a whim, she decided to create a recipe, take a photo of the burger, and submit her entry.

“I see (in the newspaper) there’s a competition and I go, oh, this sounds like fun,” she said. “I didn’t even know there was a prize. And I was like, OK, that was May 1, one or two days, the deadline is pretty darn soon. I thought, this is what I’m going to do: I’m going to do a monstrous morning burger with everything that’s amazing about a great breakfast.”

This is the first cooking contest she’s ever been in. She’s seen the world-famous Gilroy Garlic Festival Cook-Off but never entered. After her success at the Mardi Gras, she might consider entering in her hometown’s garlic fest cooking contest next year. 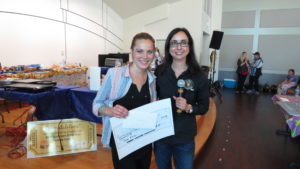 “I have a lot of garlic in my recipe. Of course, I do, I’ve got to,” she said proudly of her burger. “The garlic oil was the kicker. I used some chili garlic oil. My mom (Linda Buchanan) works at the Gilroy Outlets at the Gilroy Welcome Center and they sell a chili garlic oil that she turned me on to. Every birthday and Christmas, I need more oil.”

A nurse, Lynn was born and raised in Gilroy and graduated from Gilroy High School in 1994. She and her husband, Curt, have two girls, Morgan, age 13, and Sydney, age 10. She likes to do “food art” to make the dishes she prepares for her family a little more fun. She practiced preparing the burgers in the one-hour time limit required by the contest and tried out the Walk of Shame recipe on Curt and friend Kelly. They proved to be honest critics, giving her suggestions to improve it. She had intended to put a fancy last flourish on the top of the French toast of her burger but ran out of time to do it. 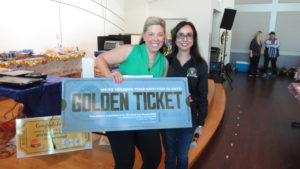 “That hour time crunch, I had it in the bag ready to go, but there were a few little hiccups,” she said. “The griddles weren’t going, the hot plates weren’t working, but I did want to put a little mushroom stencil embellishment but couldn’t get to it.”

The contest was sponsored by the Western Mushroom Marketing Association, the Santa Clara County Cattle Women and the California Cattlewomen. The four contestants were selected based on their submission of a recipe and a photo of a blended beef and mushroom burger.

At the end of the contest, emcee Emily Bettencourt invited the judges to say a few words to the contestants.

Spring said: “All four burgers were delicious and it was a very tough choice.”

Ponzini said: “Very good and very nice, ladies. Everything was good, some of them were different which made it very interesting, so thank you.”

Borror said: “All very good. I guess you put a challenge to us is that a plain burger with tomato and avocado just doesn’t suffice the kitchen table at home.”