Senior profile: Connected to the community, Al Pinheiro returns to his roots

After 43 years in the insurance business, former Gilroy mayor will now focus on travel and family 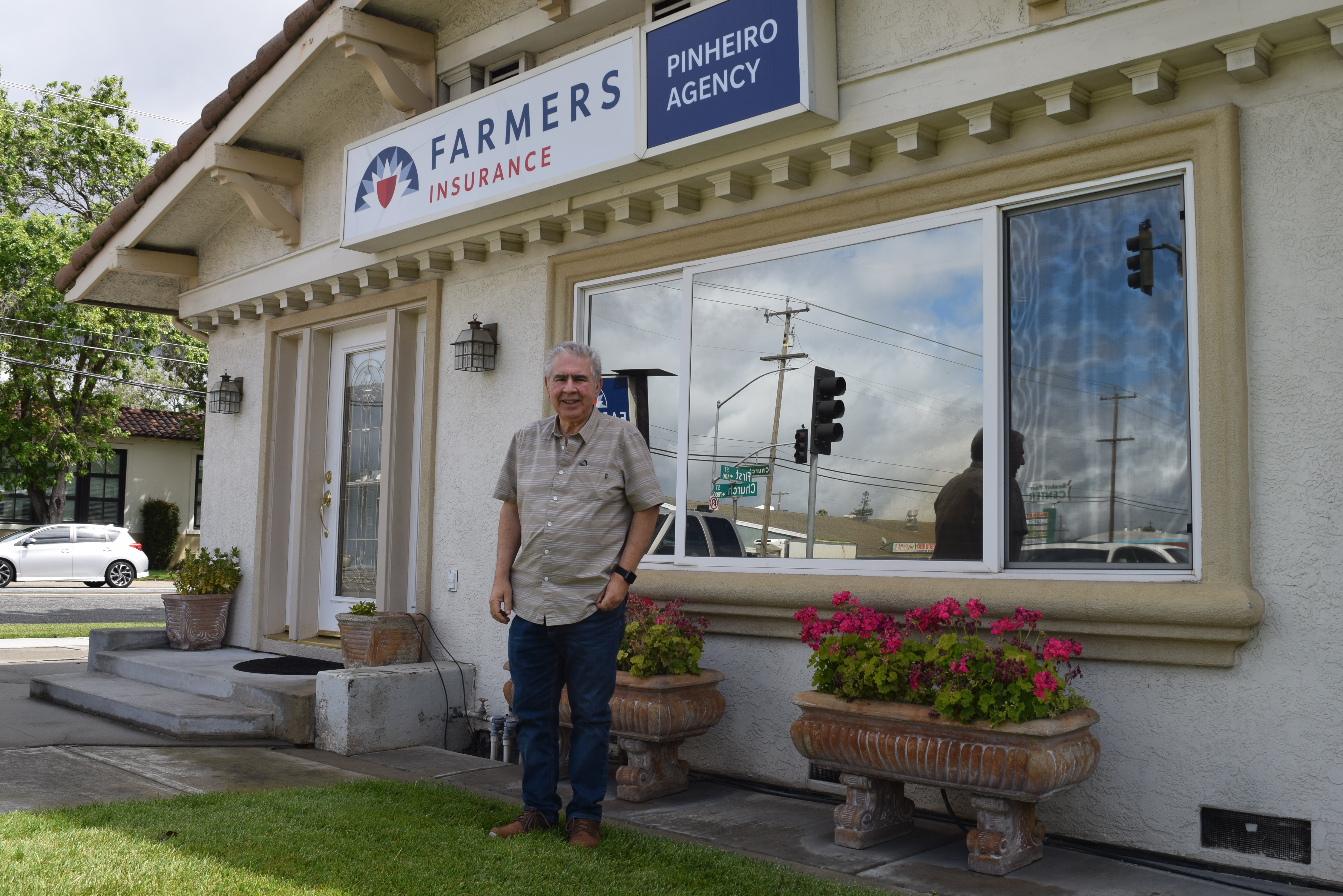 Photo by Robert Airoldi Al Pinheiro in front of the insurance business he recently sold to his daughter-in-law.

After 43 years, Al Pinheiro retired from the Farmers Insurance agency which bears his name in August 2018. But the former Gilroy mayor, who served from 2004 to 2012, isn’t slowing down. Instead, he’s embracing the opportunity to return to his roots — and help others do the same.

“Insurance was fun, but after 43 years, it’s time to say goodbye,” he reflected after selling his business to his daughter-in-law. “I’m very fortunate, and so are my clients, that the transition was seamless. Stefanie has been there all these years, connected to clients. We’ve received lots of feedback on how happy they were that it was passed on, not taken over by some stranger.”

In fact, Stefanie Pinheiro started at the agency when she was 18 years old, and caught the eye of Al’s son, David, who also works for Farmers. The rest, as they say, is history. Not just for the Pinheiro family but for Gilroy.

“My proudest moment,” Al recalled, “is that I have been able to pass it on to family. It still has the name. And I’m even prouder that my daughter-in-law will continue it. She’s so professional and will treat clients the same way we did. It’s a nice legacy to leave.”

Al and his wife, Vilma, are focused on a more personal endeavor now, Caravelle World Travel, which he has run for nearly 30 years. The agency is housed in the same building as the insurance company, a familiar site at 190 First St. Al still keeps a desk there. The company coordinates tours in Europe and the U.S., but Al’s favorite destination is his native Portugal.

Al was only 8 when his mother was widowed. His hometown of Angra is located on the island of Terceira, which is part of the Azores, an archipelago in the middle of the North Atlantic Ocean. When he was 12, they came to America and settled in Gilroy, as did many Portuguese families. Although he’s technically part of the Class of ’71, Al graduated early from Gilroy High School in 1970. Then he went on to attend Gavilan Community College.

He quickly became immersed in the Portuguese community here and is still a fixture at the Irmandade da Festa do Divino Espirito Santo, or I.F.D.E.S. Lodge-Portuguese Hall, on Old Gilroy and Forest streets. When a fellow Portuguese speaker comes to visit his home, he slips into his native tongue effortlessly. It’s easy to see that it’s important to him to keep his culture alive. As mayor, he even established Angra as a Sister City, through the Gilroy Sister Cities Association. And he’s excited to share the country of his birth with travelers.

“The Azores are named as one of the top destinations in the world to visit,” Al said. “Security is a concern in world travel right now, and it’s secluded in the Atlantic. It’s a beautiful area that keeps their traditions in many ways, with cultural events. And it’s got some of the most amazing views. Eco-tourism is big there. People hike, walk trails. You can be driving and come upon cows moving from pasture to pasture.”

Caravelle offers cruises in Europe, France, and Alaska. But it’s that tour of the Azores and Portugal every year that means the most to him.

“When I say I know Portugal, it’s exactly that,” he said. “I take people to places regular tourists don’t go. It’s very personal.”

And it’s an opportunity to visit his daughter, Gena, who lives in the Azores.

His sons, David and Justin, live in Gilroy, along with Al’s three grandchildren. Family is the cornerstone for the Pinheiros, founded on deep roots, a vivid culture, and a commitment to community.

“I can’t express how thankful I am for all the people in Gilroy and other areas who trusted me to be their insurance agent for 43 years,” he said. “My first and second clients are still with us.”

He’s also a fervent supporter of downtown businesses. On any given weekend, you’re likely to find Al in a downtown eatery.

He’s been having Saturday breakfast for 15 years with a group he founded, which he refers to as “a bunch of guys,” at Old City Hall Restaurant. On Sundays, his family usually meets at Garlic City Café.

“I just hope more people embrace downtown,” he said. “There’s a stigma that it’s not safe. But I go to all restaurants downtown. What I tell people, since being mayor, is that the day you embrace downtown, the day I have to wait to get into a restaurant, that’s when I and others will invest money.”

Downtown Gilroy is a frequent setting for Al’s personal and professional history. His first job was delivering a local newspaper.

Then he moved on to selling shoes at Carl’s Shoes, on Fifth and Monterey streets, where Mafalda’s Bridal Shop now sits.

He’s also a founder and board member of Pinnacle Bank in downtown Gilroy. In addition to serving as mayor, he’s had posts on the planning commission, and city council. So the downtown vibe is something he cherishes.

“I loved to sit and have an espresso at Fifth and Monterey,” he remembered, noting that there’s a popular coffee shop there now. “Actually, I still love to sit there and have my espresso.”

When Al moved to Gilroy in 1964, the population was 12,000. Today, its home to nearly five times as many people. Times have changed, but Al remains committed to his values and his upbringing. He said that one thing his mother taught him was to give back to his community tenfold. He’s proud to have roots in Portugal, as well as Gilroy.

“It’s hard to explain what the Portuguese community means to Gilroy. A lot of us give back to the community we love,” he said. “It’s given me so much.”

It’s been 55 years since Al Pinheiro moved to Gilroy. And the city, and particularly its Portuguese community, is forever indebted to him.