Fired worker kills two co-workers, then himself at The Ford Store

Gofundme account set up to help families affected by tragedy 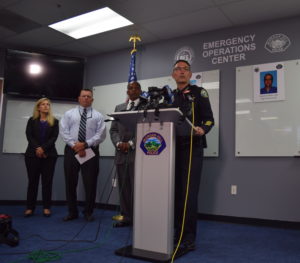 A brave struggle by one of the victims of a deadly workplace shooting gave co-workers and customers at The Ford Store of Morgan Hill time to flee before he was shot twice while wrestling with the gunman.

At a press conference Morgan Hill Police Chief David Swing described how a 60-year-old San Jose man, who was fired hours earlier from his job at the dealership, shot and killed his two supervisors at The Ford Store before turning his handgun on himself. Steven Leet, an eight-year employee of the dealership, shot his direct supervisor Xavier Souto, 38, of San Jose, then shot Souto’s boss, Brian Light, 59, of San Jose, who attempted to disarm Leet.

“The families are devastated by the loss of their loved ones,” Swing said. “It’s a tragic and senseless loss.”

Swing said the events of the afternoon of June 25 began when Leet was fired about 4:15 p.m. He left the building and hung out at his vehicle for about 20 minutes before he returned to the dealership. Leet showed no signs of violence as he meandered near his work area. A short time later, he had a conversation with Light and Soto in a nearby office. He then shot Soto first at which point Light tried to disarm Leet, but was unsuccessful.

“(Light’s) actions allowed precious seconds for others to flee,” Swing said. As police vehicles started to arrive at the scene, Leet then walked into the parking lot, sat on a curb and shot himself in the head.

Police started getting 911 calls reporting an active shooter at 6:03 p.m. and the first officers arrived at 6:07 p.m., Swing said. Officers found the suspect dead in the parking lot with the revolver nearby. A second team of officers entered the building followed closely by fire department personnel who came to offer first aid if needed. Inside the store, they found the two victims.

“It appears it was a spontaneous act that resulted in the loss of two fathers,” Swing said.

Souto leaves behind a wife and two sons. He started working at The Ford Store in 2012 as a Parts Counter Technician and was promoted to Parts Department Manager last year.

“He was known for the love of his family,” Swing said.

Light leaves behind two sons. He started working in the car business 30 years ago and was recently hired at The Ford Store to help mentor younger workers.

“He wanted to train the next generation,” Swing said.

Sgt. Bill Norman thanked partner agencies who came to the aid of MHPD, including the San Jose Police Department, which sent officers to secure Leet’s home while MHPD worked to get a search warrant. Once obtained, they found more than a dozen firearms, legally purchased, in his South San Jose home on Russo Drive. In the service of the search warrant they found no other evidence of pre-planning. The weapon used in the shooting was a .38 revolver. A semi-automatic was recovered from his vehicle, Norman said.

Swing also thanked partnering agencies who helped and praised his officers who ran into danger.

“This is emblematic of the bravery our officers show every day,” he said.

Mayor Rich Constantine said: “To the citizens of Morgan Hill I want to express that although last night’s events were tragic, one tragedy does not a trend make, and Morgan Hill is and will continue to be one of (the county’s) safest cities.”