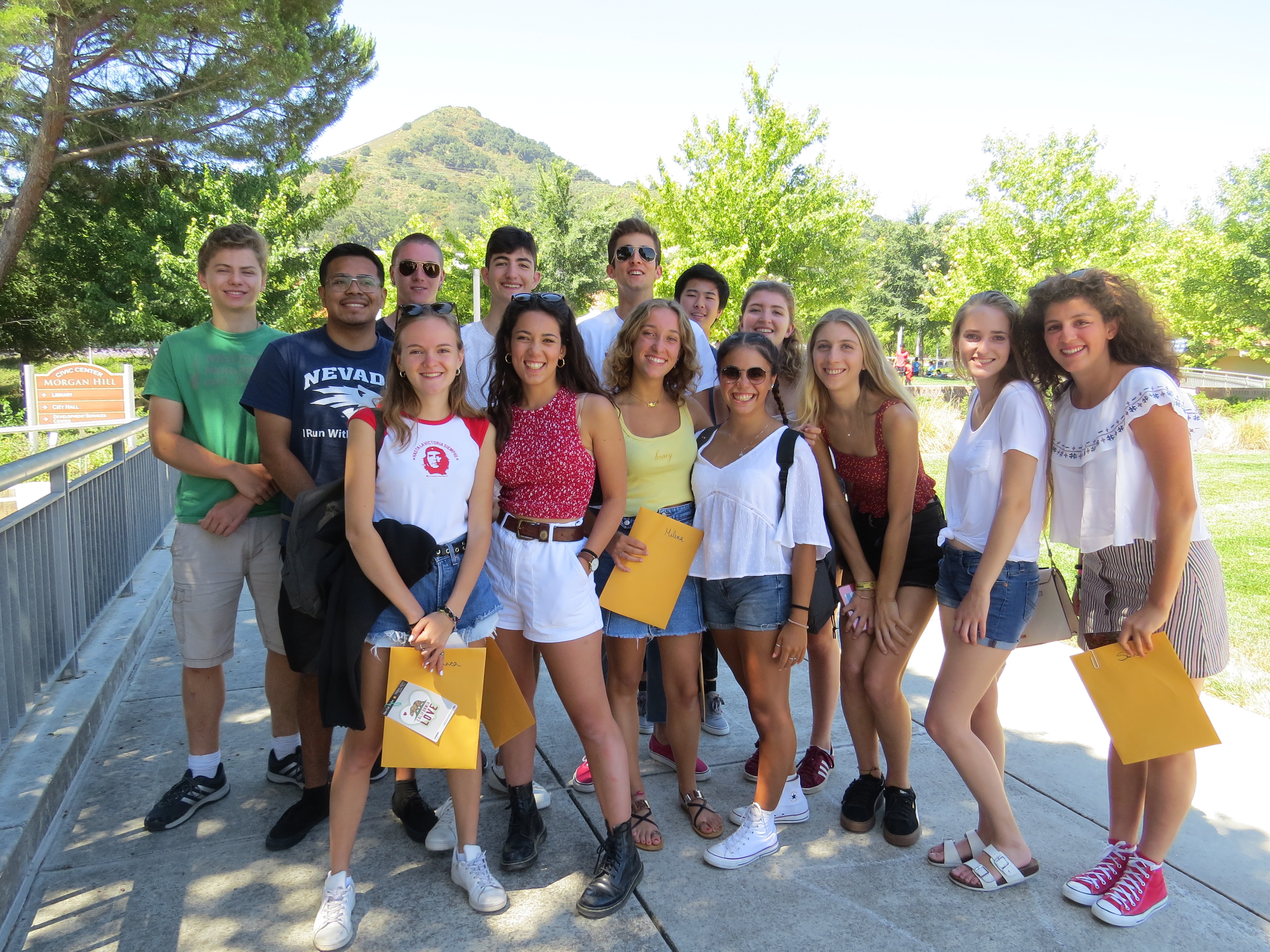 Photo by Marty Cheek
Italian students and some of their Morgan Hill hosts pose for a photo outside the city’s council chambers.

Tours of Specialized Bicycles and historic downtown Morgan Hill and ziplining through the redwoods are a few of the adventures nine young people from San Casciano, Italy, have been experiencing this summer as part of a Sister Cities cultural exchange.

The Italian students arrived July 20 for a two-week visit, departing Aug. 3. Accompanied by two Italian chaperones, they are staying at the homes of five Morgan Hill host families with American students who visited them last year.

Located in central Italy just south of Florence, San Casciano is the first Morgan Hill Sister City. It was chosen for its similarities in agriculture, population size and tourism opportunities. The exchange program was started in 2018 and builds on a similar one done with Morgan Hill’s Japanese Sister City Mizuho for youths to learn about each other’s countries.

The Italian students met Morgan Hill Mayor Rich Constantine July 22 at the City Council Chambers. He welcomed them and hoped they would enjoy their activity-packed itinerary.

“As soon as you leave here, it’s going to be boom, boom, boom, boom,” Constantine told them. “You have a short amount of time with us.  I hear you’re going to have a wonderful time.” 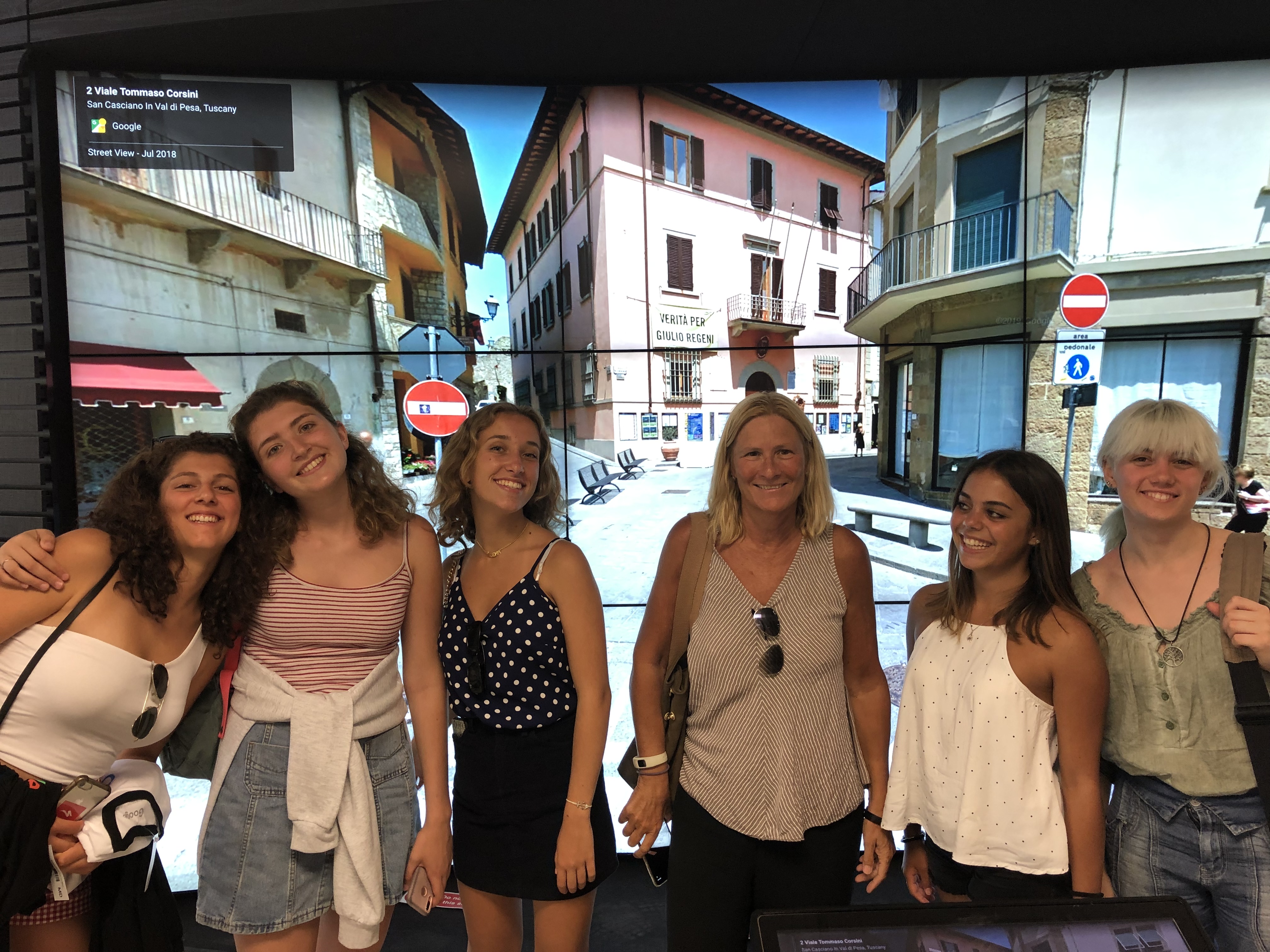 Photo courtesy Amy Whelan
Students from San Casciano, Italy, pose in front of a photo of their hometown in a Google store at the company’s headquarters

Amy Whelan and Pier Antoniucci volunteer their time organizing activities and places for the Italian students to visit. Besides Specialized and downtown, the students took a “Silicon Valley Day” tour of high-tech company headquarters including Google and Apple. They also spent a day exploring the redwoods through a zipline company in Felton in the Santa Cruz Mountains.

A Monterey Bay outing was spent visiting Carmel Mission and Point Lobos State Park. On the weekend of July 26-28, the host families took the Italian students to various long-distance trips to places including Yosemite National Park, Disneyland and Lake Tahoe. Their second week includes two days exploring San Francisco and the fun of the thrill rides at Santa Cruz Beach and Boardwalk.

Lori Mattea serves as one of the chaperones. She is originally from the Bay Area but now lives in San Casciano after falling in love with Italy as a college intern.

“The students are all really excited and open to anything that can be suggested,” she said. “They want to go from morning to night, even though they’re dead tired. From what they’ve told me, they’re having a lot of fun. Basically, what I’m understanding from what they say, they’re impressed by the houses and the breakfast and the bed — ooh, the bed was so soft and the pillows.”

The Morgan Hill young people met the Italian teens last year on their visit to San Casciano, so they were excited to see their friends again, Mattea said.

“The thing that I really like is the reconnecting of the kids who went last year,” she said. “I saw them running across the room to hug their friends from last year, and it was really cute. For me, that’s a great thing.”

The other chaperone is Chiara Sabatini. This is her first visit to Morgan Hill and she was impressed by the points of common culture between San Casciano and the South Valley community.

“It kind of reminds me of the olive trees and the wine in Italy, of San Casciano,” she said. “There are a lot of similarities here. But everything here is twice the size of everything in Italy.”

Sabatini enjoys the rural ambiance of the South Valley region.

“When you think of America, you think of San Francisco, you think of  all the huge skyscrapers and everything in the city,” she said. “And the fact that there’s so much nature around here, it’s beautiful. I actually like it better than San Francisco itself. I don’t like big cities. I’d rather stay in the countryside. It’s really a beautiful, beautiful place.”

Francisco Conticelli, a 16-year-old high school student from San Casciano, was also impressed by his first visit to the Golden State.

“It’s beautiful, wonderful,” he said. “It’s very interesting to see all the differences between Italy and California, and I’m looking forward to see all the interesting things that you have here. I look forward to maybe seeing what you eat and what you do for fun here in California. Your culture is very modern and everything. We in Italy have a past with Romans and everything, but here everything is new and modern and I want to see that.”