Community Voices by Kathy Sullivan: A new season of ‘Stories from the Past’ debuts at Founders Dinner

The next time you visit Chitactac-Adams Park or Mt. Umunhum, you might encounter Valentin Lopez, tribal chair of the Amah Mutsun people. He represents generations of indigenous people who inhabited California some 10,000 to 15,000 years before European settlers laid claim to it. Lopez is sought after by regional and county parks and preserves to share how natives revered and stewarded the land.

Also known as the First People, Indigenous People, or less often today, as American Indians, Native Californians were nearly wiped out by waves of explorers, missionaries, soldiers, cowboys, prospectors and settlers. To study American history from the 1900s onward is to have the impression that natives had disappeared. On the contrary, Lopez says, “We are still here.” 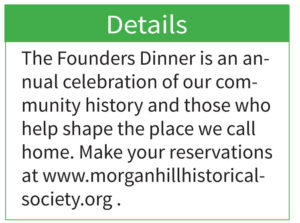 If you patronize any of our local fresh produce markets or wineries, consider that South County flourished as an ag economy long before Silicon Valley was born. And that economy was built on the backs of migrant workers from south of the border who came to work the soil, plant seeds, tend crops and install miles of irrigation in the fields. Hard-working people forced to live in tents and chicken coops, always following the seasons to wherever the next harvest was ripe for picking. People like Rita Chavez Medina who worked beside her brother Cesar in the fields and marched beside him in the United Farm Workers movement. Their sacrifice meant children and grandchildren could attend school and build careers in every facet of modern California society.

If you’re driving along U.S. 101 into Morgan Hill, you might notice an old rodeo arena to the east. Known as El Rancho Grande, it was built and operated by the Peña family. Their daughter Ofelia Peña McCain still recalls polishing her father’s boots, spurs and belt buckle so he could continue the vaquero horsemanship tradition and host charreadas, Mexican rodeos. He also partnered with local bull riding legend Bill Lyle and welcomed young cowboys from all over to hone their skills at “the green rodeo” of Morgan Hill.

These stories and more are part of this year’s “Stories from the Past” project. Now in its sixth year, this evolving project leverages the power of the documentary film genre to capture personal histories and narrative accounts of people whose lives have shaped the heritage and history of the Morgan Hill, Coyote, Madrone and San Martin area. The project is a collaboration between our board members and a local filmmaker team including Nils Myers, Mattie Scariot, and Robin Shepherd. Our team researches historical figures and topics, conducts on-camera interviews, and spends hours in the film editing studio to create a masterfully-produced montage of stories in a 30- to 40-minute documentary film.

While general reservations for the Founders Dinner are now closed, the Morgan Hill Historical Society has set aside some reservations to allow Morgan Hill Life readers to attend. Cost is $70 per person. Seating is limited. Visit www.morganhillhistoricalsociety.org.

This year’s documentary makes its debut at the Morgan Hill Historical Society’s 50th Annual Founders Dinner, Sept. 7 at the Morgan Hill Community & Cultural Center. People interviewed for the documentary are honored at the event and presented with a copy of their individual, edited film, and the official “Stories from the Past” montage. The society is in the process of making its archived film series accessible online.

In keeping with tradition, students from local high schools will provide volunteer support at the event.

Many families are eager to have their histories become part of the Morgan Hill Historical Society’s archives, which are shared with the community including our schools and senior centers. Our goal is to bring increased diversity into the project, sharing untold stories and amplifying the voices of underrepresented communities, and our filmmaker team is making it happen.

The event program includes a reception, formal dinner, distribution of raffle prizes, and the film screening. In keeping with tradition, youth from local Rotary Interact and AVID clubs will provide volunteer support at the event.