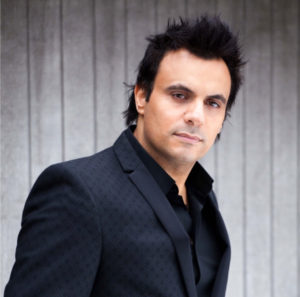 He’s from Australia and can sing in five languages. His heritage is Italian and he is an Emmy Award-nominated performer. His audiences say he is hilarious. He sells out most shows whenever he performs and he is making an appearance in Morgan Hill. Who is such a person?

He is Australian singer ALFIO. Considered to be the consummate showman dazzling audiences with his powerhouse voice combined with his combination of Australian charm and Italian flair, he is known as the one that breathes new life into the music of Elvis, Sinatra and Bocelli. 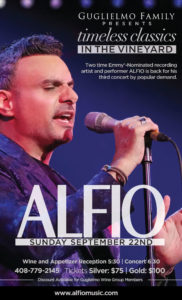 ALFIO is also a singer-songwriter and within his shows he performs his own tunes which are fresh and exciting.

The quality of his tenor voice evokes a mash-up of Andrea Bocelli, Tom Jones and Michael Bublé and he also does something few if any other artists can do … he performs an Aria while accompanying himself on piano.

As an Italian crooner with an Australian accent, he tends to catch his audiences off-guard … in the best possible way.

ALFIO has the ability to balance a nostalgic repertoire of familiar tunes with his original songs, and in between, he draws his fans into hysterics not with jokes, but with his charming Australian-Italian demeanor.

Known around the world for his modern interpretations of English and international standards, classic takes on contemporary chart-toppers, and original compositions that bridge musical genres, this powerhouse vocalist brings a new approach to the tenor tradition while joining the illustrious ranks of world-famous performers such as Luciano Pavarotti, Andrea Bocelli and Michael Bublé. ALFIO’s primetime live TV special “ALFIO in Concert” has been viewed by more than 100 million people across the United States.

His current tour includes many major U.S. cities, however, in the Bay Area his only performance will be at Guglielmo Winery in Morgan Hill. The Guglielmo brothers, who are both friends and fans of ALFIO, were thrilled when ALFIO accepted their invitation to perform at their historic winery on the outdoor stage overlooking the beautiful sprawling vineyards.

There will be only one show on the evening of Sunday, Sept. 22. I am told as of this writing that 75 percent of the VIP seats have been sold and general seating is swiftly selling as well. I already have my tickets and look forward to seeing ALFIO in action.

For tickets and more information go to www.guglielmowinery.com or call the winery at (408) 779-2145.

On another note, The District in downtown Gilroy has re-opened their doors with continued plans for live music of various kinds.

The fundraiser at Golden State Brew & Grill Aug. 18 for the victims of the Garlic Festival shooting was quite successful with thousands of dollars raised. A big thanks to the bands that donated their time and talents.

The Porchfest returns to Gilroy Sept. 14. It happens on Hanna Street between Third and Sixth streets. They have scheduled a wide variety of acts from country, folk, swing and other musical genres. It runs all afternoon and is free to attend. Bring a lawn chair and your own snacks and beverages.

The all new Lightpost Winery will have a Grand Opening Celebration from 11 a.m. to 7 p.m. Sept. 14 with live music (1:30 to 4:30 p.m.). Complimentary appetizers with your flight purchase and a day of fun.

They are located at 900 Lightpost Way just off Cochrane Road near U.S. 101 in Morgan Hill.

The Taste of Morgan Hill is scheduled for Sept. 28 and 29. There will be two stages, one for full bands including a Saturday evening show from 6 to 10 p.m. that features Isaiah Pickett opening for Faithfully Journey Tribute Band, and the second stage for acoustic solo and duo acts throughout the two days. This is going to be a great day and night of music and fun.

There will be a fundraiser to help pay for materials to renovate a bathroom for Sam Curtis, who is now recovering at home after a car crash last year. It will be held from 6 to 9 p.m. Sept. 13 at Kelly Brewing Company in Morgan Hill. D.R. Domenichini is donating the labor. Hope to see you there.

If you have a music tip, send it to [email protected]

Mark Fenichel
Mark Fenichel is the Advertising/Marketing Director for Morgan Hill Life with more than 40 years of marketing experience. If you're interested in learning more about building your business brand, contact Mark at (408) 410-4782 or email him at [email protected]ganHillLife.com.
Latest posts by Mark Fenichel (see all)