With the help of resident and business sponsors, it is now easier than ever to ride a bike downtown 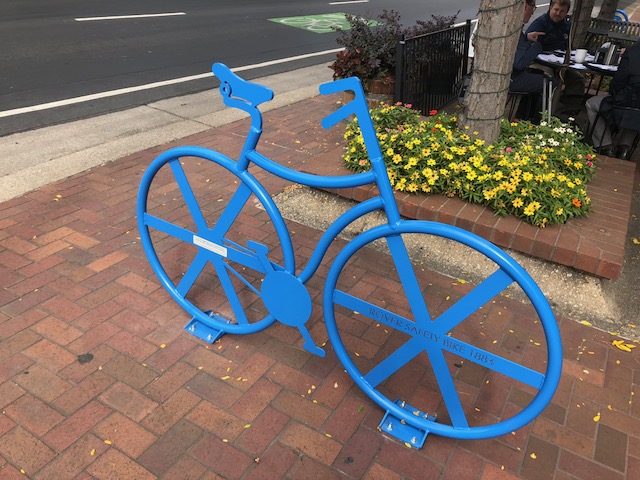 Morgan Hill continues to spruce up its artsy appearance with the addition of 36 bike racks in 18 locations around downtown, at the Community Center and the Centennial Recreation Center outside the skate park. These wonderful and whimsical racks cap a year-long project by Leadership Morgan Hill, whose dedicated students each year adopt a community project. This year’s group chose a project to reflect Morgan Hill’s history, culture, spirit, and future, while making downtown more beautiful and easier to get to.

Bike racks include replicas of an 1817 Draisine (first push-bike), an 1879 Bicyclette (first chain-driven bicycle), an 1884 Rover Safety Bike (first made in today’s style), an 1869 Penny Farthing, an 1870 Unicycle, and a modern race bike. With the help of resident and business sponsors, it is now easier than ever to ride your bike downtown.

Meanwhile, Craft Roots Bar and Veggie Grill, one of Morgan Hill’s newest eateries, has been hopping since its soft opening this month. September is giving them the chance to perfect their 100-percent plant-based menu, hours and patio seating. As is the trend in town, Craft Roots is fully owned and operated by a local family who saw the need and opportunity for a restaurant centered on vegetables, fresh, local foods and craft beers and juice-based cocktails.

One of their goals is to honor the craft of cooking and creating beverages using the freshest of ingredients. To that end, they offer craft beers originating locally from San Francisco down to Monterey. They also serve cider from Ten Five One Cider Co.

Ten Five One Cider Co. is another local, family-owned business getting a start in Morgan Hill. Looking for a gluten-free and low sugar alternative to beer, Laura Bertoldi used her years of beer-making experience to start the company in a barn on her property. Six years and many tests later, her ciders can be found at the Running Shop and Hops, Craft Roots, Cider Junction in San Jose, and in locations from Oakland to Monterey.

Both Craft Roots and Ten Five One got involved in the community immediately, as a stop and beverage, respectively, at the Morgan Hill Brew Crawl this month. As a result of Ten Five One’s pairing with Huntington Station, the two businesses found another way to work together. Every Monday night during football season, from 6 to 9 p.m., Ten Five One will be at Huntington Station with a single batch of a unique Monday Night Flavor of the Week.

Jodi Hall is the owner of Bike Therapy, along with her husband, Doug. They moved to Morgan Hill with their two children three years ago and could not love it more. Jodi is a member of the Downtown Association board and the Bicycle/Pedestrian Advocacy Group.