2020 Woman of Year volunteers because she loves hometown 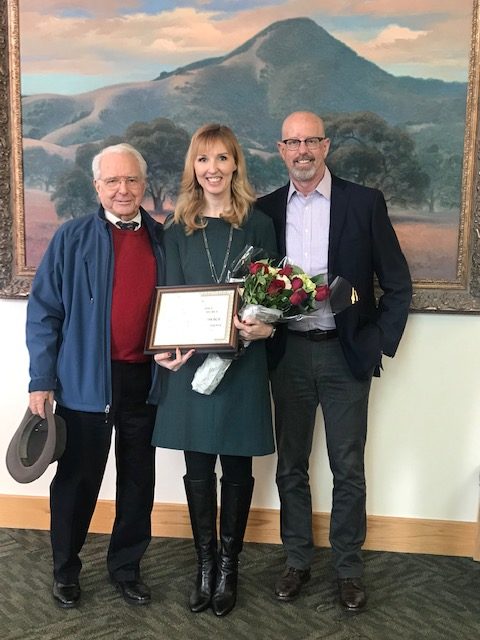 Caitlin Robinett Jachimowicz was an 18-year-old Live Oak High School senior when she received the recognition of 2002 Student of the Year from the Morgan Hill Chamber of Commerce. Eighteen years later, she was surprised by the Chamber with another honor: 2020 Woman of the Year.

At the Chamber’s December Good Morning Morgan Hill breakfast at the Community and Cultural Center, Chief Operating Officer Brittney Sherman called up several local women leaders to the front of the room at the Community Center: Peggy Martin, Kathy Sullivan, Amy McElroy, Suman Ganapathy and Christina Turner. She then stated the next Woman of the Year, to be honored at the March 7 Celebrate Morgan Hill, was present in the room. When she announced Jachimowicz’s name, a round of applause filled the El Toro Room.

Jachimowicz’s face was full of surprise as she received hugs from the other women. She admitted she had now figured out why her father, Phil Robinett, had driven from his home in San Jose to be a guest at the breakfast.

“My first thought is that this is really mean to do to me before I got enough coffee this morning,” she said jokingly. “My second thoughts is that the theme is ‘Denim and Diamonds’ for Celebrate, and this is a long way to go to get me into formal denim.” 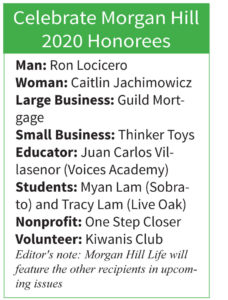 The 36-year-old lawyer’s resume is filled with many impressive accomplishments. She served as a commissioner for the Santa Clara County Parks and Recreation Commission from 2011 to 2017. She served on the Morgan Hill City Council, appointed to the position in January 2017 when Councilmember Gordon Siebert moved to Nashville. During her two-year term as a councilmember, she founded Morgan Hill Women’s Week, a project devoted to promote female leadership in the community.

On the Edward Boss Prado Foundation, she spends much of her time as a board member and volunteer. And she is a member of the newly formed Engage Morgan Hill Community Advisory Group. State Assemblymember Robert Rivas appointed her in 2018 to serve as a delegate for the California State Democratic Party.

Jachimowicz volunteers so much of her time and talents because she loves her hometown, she told the breakfast attendees. 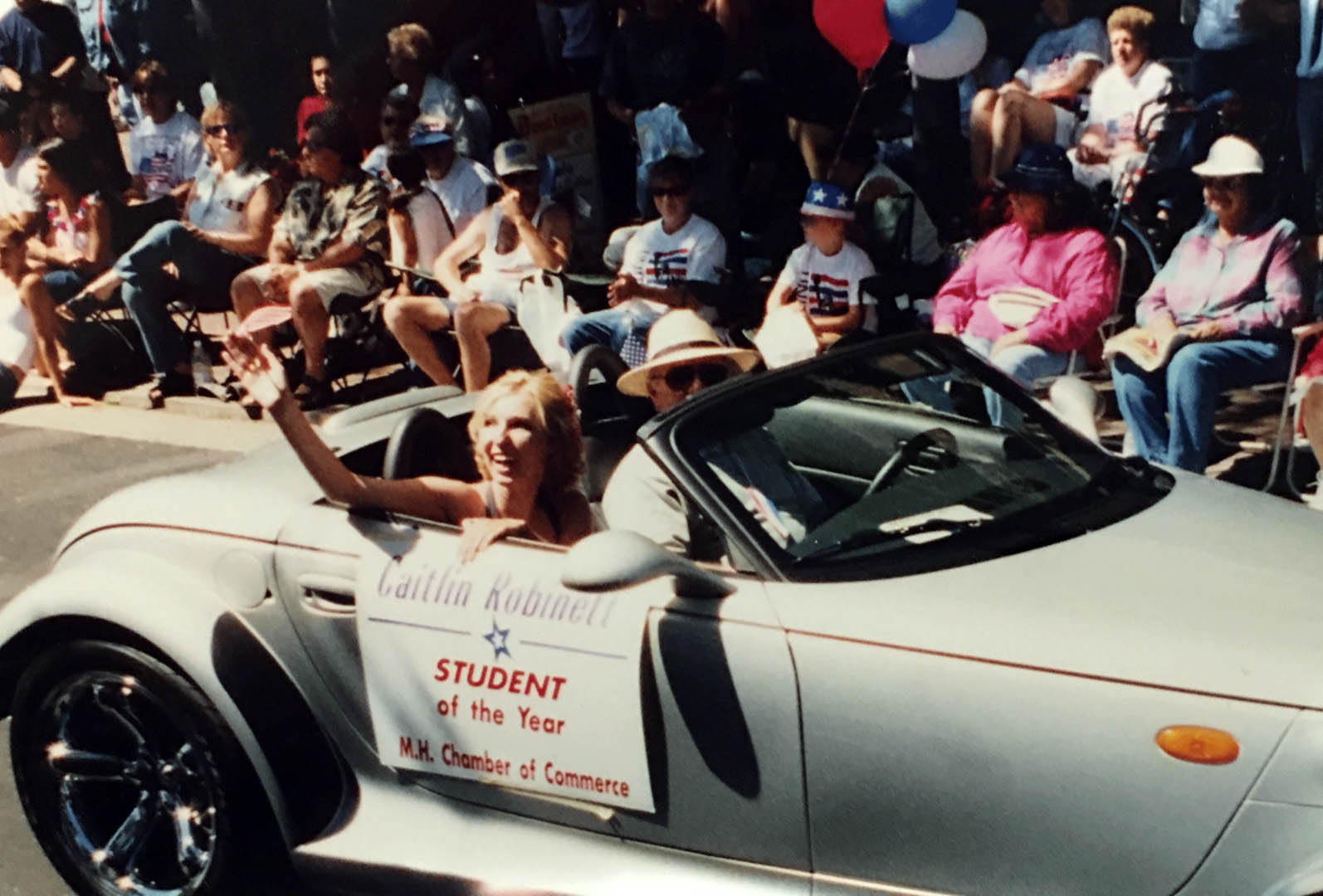 Then known as Caitlin Robinett, the 2002 Morgan Hill Chamber of Commerce Student of the Year, waves to the crowd during the annual Fourth of July Parade.
Photo courtesy Jachimowicz family

After graduating from Live Oak, Jachimowicz studied journalism at Cal Poly in San Luis Obispo. She transferred to Seattle University where in June 2006 she earned a bachelor’s degree in communication studies. Following that, she decided to pursue a law degree at Santa Clara University School of Law, focusing on public interest and social justice. During her time at the school, she went to Haiti and conducted research for a report on the island nation’s justice system. Three days after getting back to California, Haiti experienced a major earthquake. She returned six weeks later with supplies.

“I really found my home there among the Jesuits,” she said of her law school years. “I don’t think law school would have been right for me if it wasn’t the right law school. That social justice background formed the kind of person I want to be in general.”

Prior to graduating from law school in 2010, she developed her interest in public policy issues when she worked as a research fellow at the Panetta Institute for Public Policy in Monterey. She focused on writing briefing memoranda on issues including healthcare, national security, education policy and youth perceptions on public service.

As a newly minted lawyer, Jachimowicz worked as a congressional assistant for San Jose-based Congresswoman Zoe Lofgren. “I had been Zoe’s scheduler and her policy aid,” she said. “I worked for her for a year but unfortunately my law school loans just didn’t allow me to work in that kind of public service.” 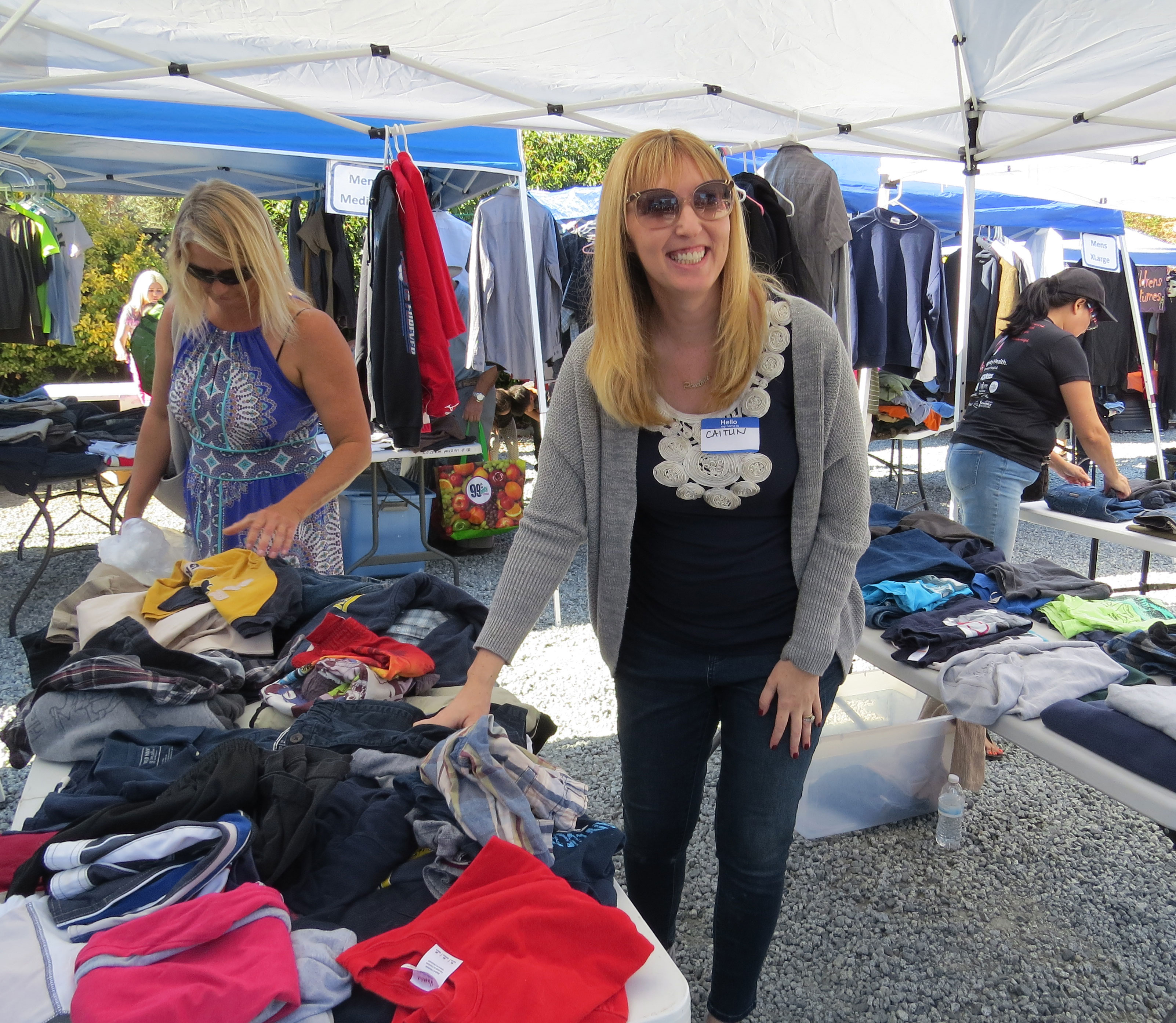 Caitlin R. Jachimowicz helps out with the Oktoberfest.
Photo by Marty Cheek

Jachimowicz took on a job at a Santa Clara-based law office as an associate attorney.

While in law school, she met the man who would become her husband, Joshua Jachimowicz. Soon after their daughter, Penelope, was born they moved to Morgan Hill in January 2016 because they felt the community was a good place to raise a family. In 2017, she joined her husband in the Jachimowicz Law Group where she is the senior managing attorney. The firm’s main office is based in San Jose, but they opened a satellite office in Morgan Hill.

After joining the Morgan Hill City Council, Jachimowicz realized everyone else who sat at that time on dais was male — from the city attorney to the city manager and as well as the four other council members. But the next level down behind in the government hierarchy was all women including Leslie Little, Christina Turner, and Edith Ramirez. That observation led the appointed councilmember to think of an idea that led to the creation of Women’s Week.

“That year, ‘Wonder Woman’ came out and I saw it in the movie theater with my husband and I thought: This is great, but I really wish I was experiencing this film with other women,” she recalled “Wouldn’t it be neat if we had something where we can say: ‘Meet the Wonder Women of Morgan Hill?’” 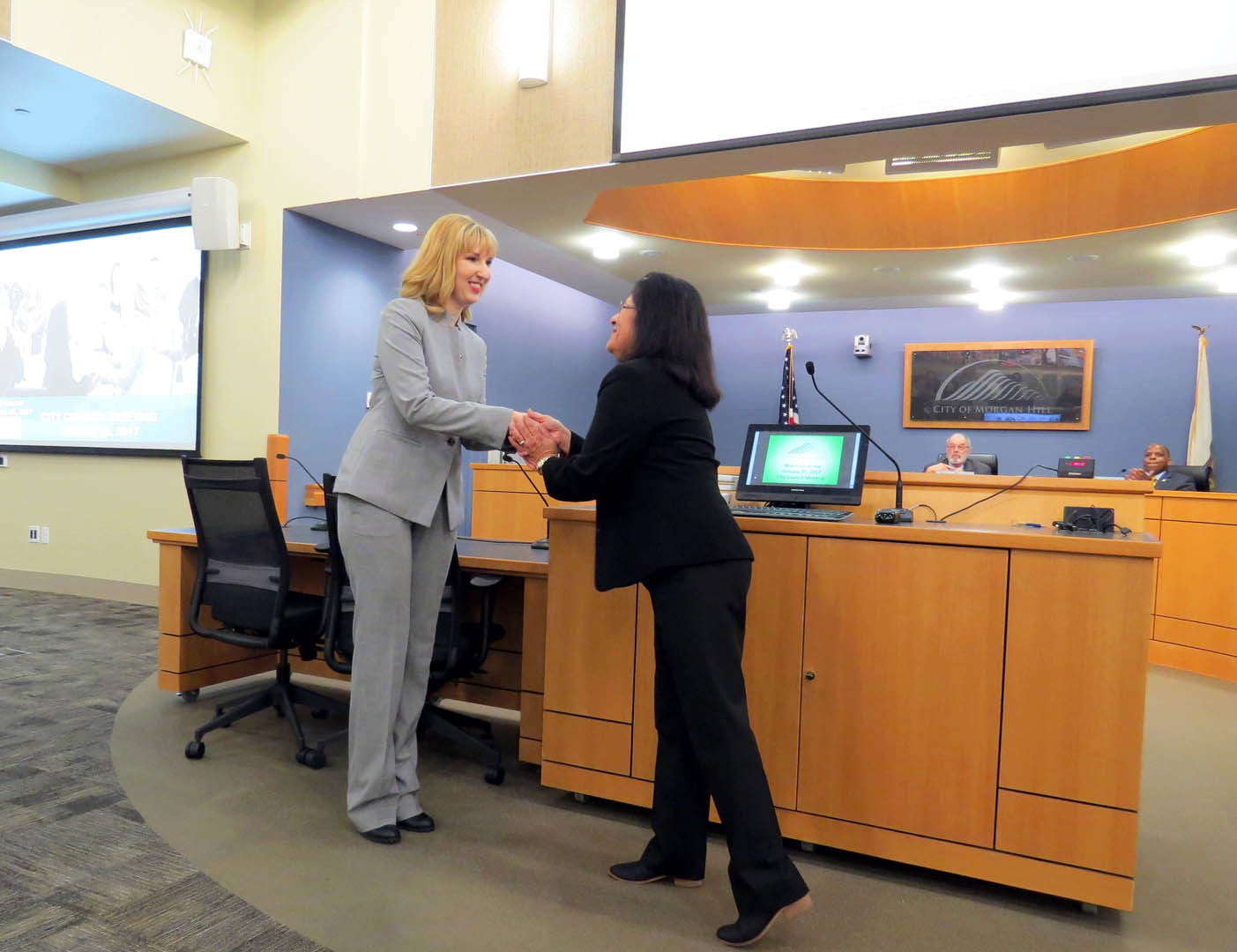 The idea didn’t gain much traction at first. Then Jachimowicz went to John Horner, the executive director at the Chamber of Commerce. She explained her idea to promote women leadership and asked for the business organization’s help. The concept evolved as more people got involved.

“The purpose of Women’s Week is to celebrate women’s suffrage and celebrate how we got to the point where we are today,” she said. “But it’s also to have conversations with men and women about the struggles women still face in the workplace and in the home and work together to find solutions and support each other so that we can continue to move forward.”

The goal of Women’s Week is to be inclusive, targeting events to both genders, she said.

“It’s just as important for our husbands and our sons and our brothers and our friends to understand why the conversations are still necessary,” she said. “There are also the expectations that we have in our society, so we need to change the perceptions that boys and girls have so that when you think of a CEO, you don’t necessarily just think of a white male of a certain age. The perception that a CEO can look like anyone can help the girls think about their job possibilities but also help the boys when they’re in the board rooms and they’re picking who the next CEO should be.”

In 2018, the couple had a baby boy, Griffin. Jachimowicz decided not to run for City Council that year because she felt it was important to spend time raising their two children. But she still stayed active in the community with Engage Morgan Hill and volunteering with the Tech Trek scholarship program in the local America Association of University Women chapter. She also increased her time with the Edward Boss Prado Foundation board, a nonprofit that helps families in need in the South Valley region.

“Our board is very active. It does take up a lot of my time and I’m glad it does because we do a lot of good in the community,” she said. “(Foundation founder) Cecelia Ponzini certainly keeps me very busy, and I’m happy to help her do the work that she does because we’re directly impacting kids and families every day.”

When her family is ready for the big commitment, Jachimowicz plans to get back into public service. She hopes to one day continue to have a positive impact on people’s lives through leadership roles in government. When she worked for Zoe Lofgren, there came a point when she had to make a decision. She could either go to D.C. and work for her office on Capitol Hill. Or she could stay in the Bay Area and put down roots in her community.

“I decided I could make more impact locally and with my neighbors and with my friends than I could at a national level,” she said. “So when I do go back into politics and into public life, it will be in a way to serve my neighbors. And I’m very mindful of that, especially now when politics is so polarizing.”