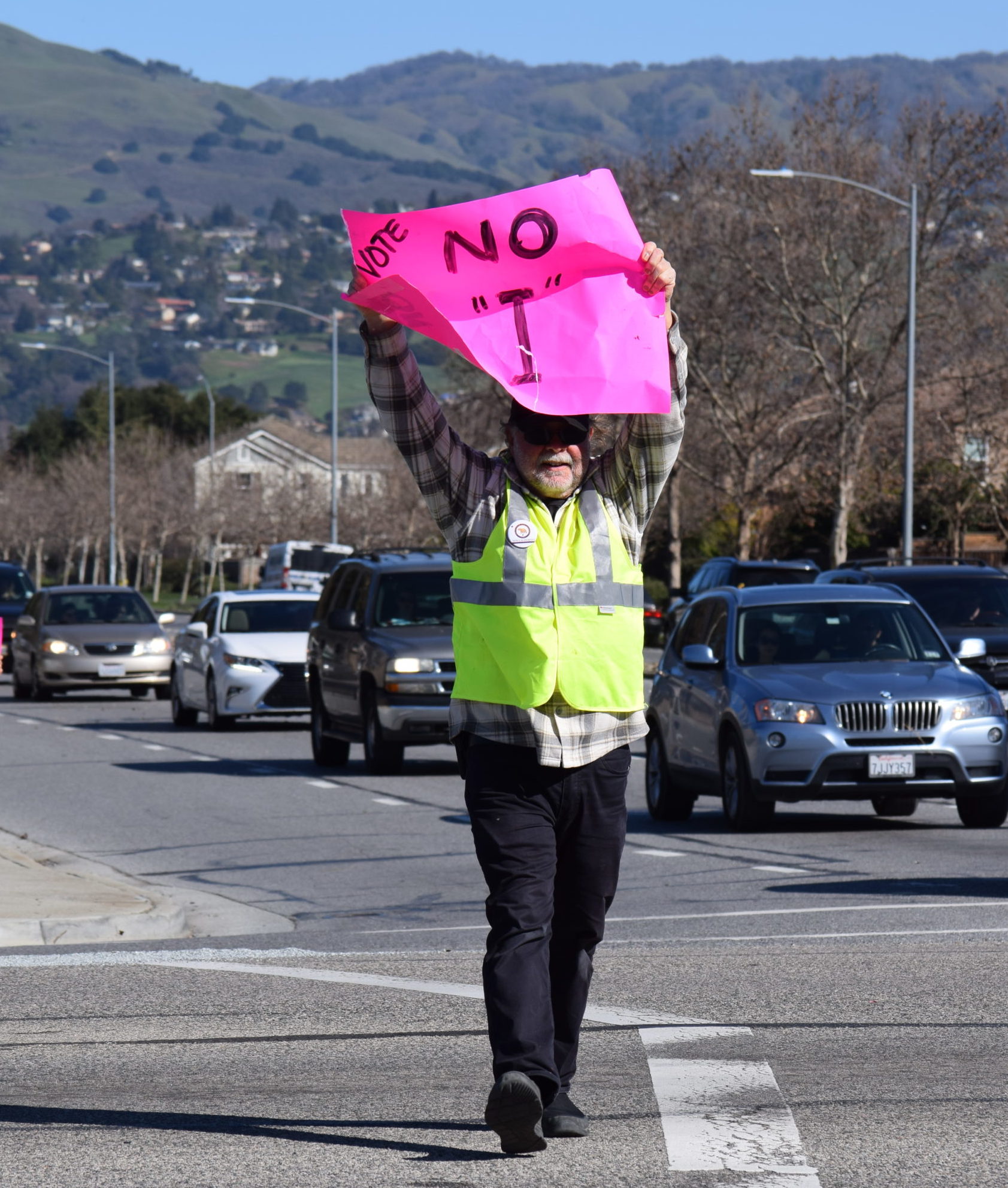 Photo by Robert Airoldi
A man demonstrating against the Measure I bond crosses the intersection of Butterfield Boulevard and East Dunne Avenue in February.

Measure A lost with 35 percent of the vote (as of Friday, March 6). It would have rezoned a plot of land to build two new hotels in the Madrone district north of downtown Morgan Hill. 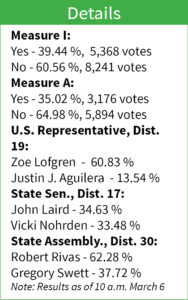 Measure I lost with 39 percent of the vote. It would have provided a bond of $900 million over 30 years to repair and upgrade Morgan Hill Unified School District facilities.

In February 2019 the city council adopted an ordinance amending the zoning on three parcels in the city’s Madrone Business Park to allow hotels as an approved use. This was later petitioned for a referendum and councilmembers chose to ask the voters for their decision.

The parcels years ago had been approved for the construction of grocery stores. The developers had tried unsuccessfully for 10 years to bring that type of business to the location. No chain such as Whole Foods thought the local market warranted coming to Morgan Hill.

The failure of Measure A to pass means Morgan Hill loses a source of revenue to help pay for a $7 million a year deficit. This potentially mean cuts in services if another source, such as a sales tax, is not found.

“For the city, it means a loss of approximately $800,000 annually in direct Transient Occupancy Tax (T0T) revenues from the two hotels, paid by hotel guests,” said City Manager Christina Turner. “The additional tax revenue would have contributed to the city’s fiscal sustainability, allowing the city to pay for critical services such as police, fire, and street maintenance. This would have helped the city in its efforts to maintain the level of service our community is accustomed to; with the limited resources we have.”

Opposition on Measure A was led by a group of hoteliers, primarily the owners of Comfort Inn. 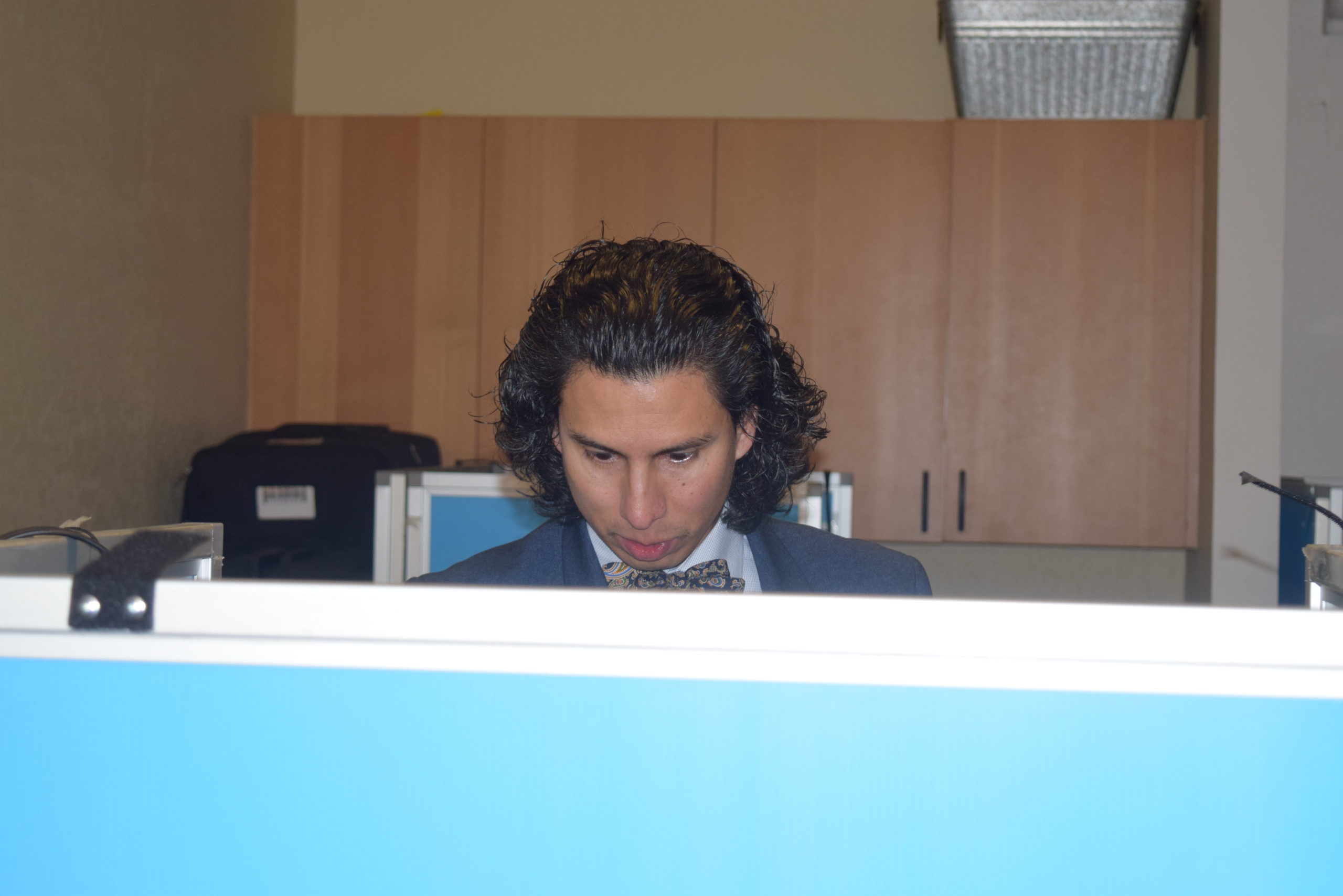 “The voters overwhelmingly voted no on Measure A by two-thirds margin because they believed rezoning Madrone Village Shopping Center benefitted a developer far more than the community,” said Asit Panwala, spokesperson for the Hotel Coalition. His family owns Comfort Inn. “They were not persuaded that the proposed hotels would produce $1 million in tax revenue because they saw there was no evidence behind it.”

Many residents expressed to Panwala they believe city leaders have “lost their way, and are chasing after dollars” by permitting development without considering the impact, he said.

“I expect that those voices will be heard again at the next election when city leaders are elected,” he said.

In 2015, the city commissioned Hotel Appraisers & Advisors to analyze Morgan Hill’s hotel market. The firm found there were 792 rooms spread across the city’s 13 hotels. In a section comparing the occupancy rate of the city’s top five rated hotels against national averages, HA&A concluded the numbers “indicate substantial unaccommodated demand.”

Measure I needed at least 55 percent in yes votes to pass in the March 3 election. During a 30-year period, bond money would fix facility projects including safety, technology and repairs. Measure I would have provided MHUSD funding as a “single authorization” for facilities as aging buildings require repairs or modernization over several decades, said Superintendent Steve Betando. This would have saved taxpayers money and meant smaller bond measure amounts on ballots will not be required every several years.

The MHUSD staff and board of trustees will discuss the next steps to address the immediate needs and the long-term Facilities Master Plan, he said.

“We will strategize every means possible short of pulling personnel funds and program funds away to pay for classrooms or critical renovations,” he said.

Measure I failed because the bond was “just too much debt,” said Mark Hinkle, president of the Silicon Valley Taxpayers Association and a Morgan Hill resident. It was the largest bond measure on the ballot in Santa Clara County in this month’s election.

Opponents of the measure incorrectly stated the funds the district receives from the state are adequate to maintain MHUSD schools, Betando said. However, the district must “absolutely rely” on bond funds to maintain public schools, he said. With the state’s allocation, 29 of 31 districts in Santa Clara County receive more money per student than MHUSD receives.

“We know the best investment for our students is to take those meager funds to maximize salaries and programs for our students,” Betando said. “It is a challenge to stay competitive with salaries when districts get 20 percent to 150 percent more money just for program and personnel.”

MHUSD still needs to determine how to fund upkeep of its facilities, said Wendy Sullivan, the board’s vice president who chaired the Measure I.

“School bonds all over the state struggled in this election, probably for reasons that aren’t specific to us,” she said. “Of course, we still have significant funding needs in our aging school buildings, and the state doesn’t nearly provide adequate funding to keep up with the cost of maintaining schools and making important safety, technology and other upgrades. It’s obvious that we need to do a better job explaining the need to our community.