Patrons are now able to return with safety protocols implemented 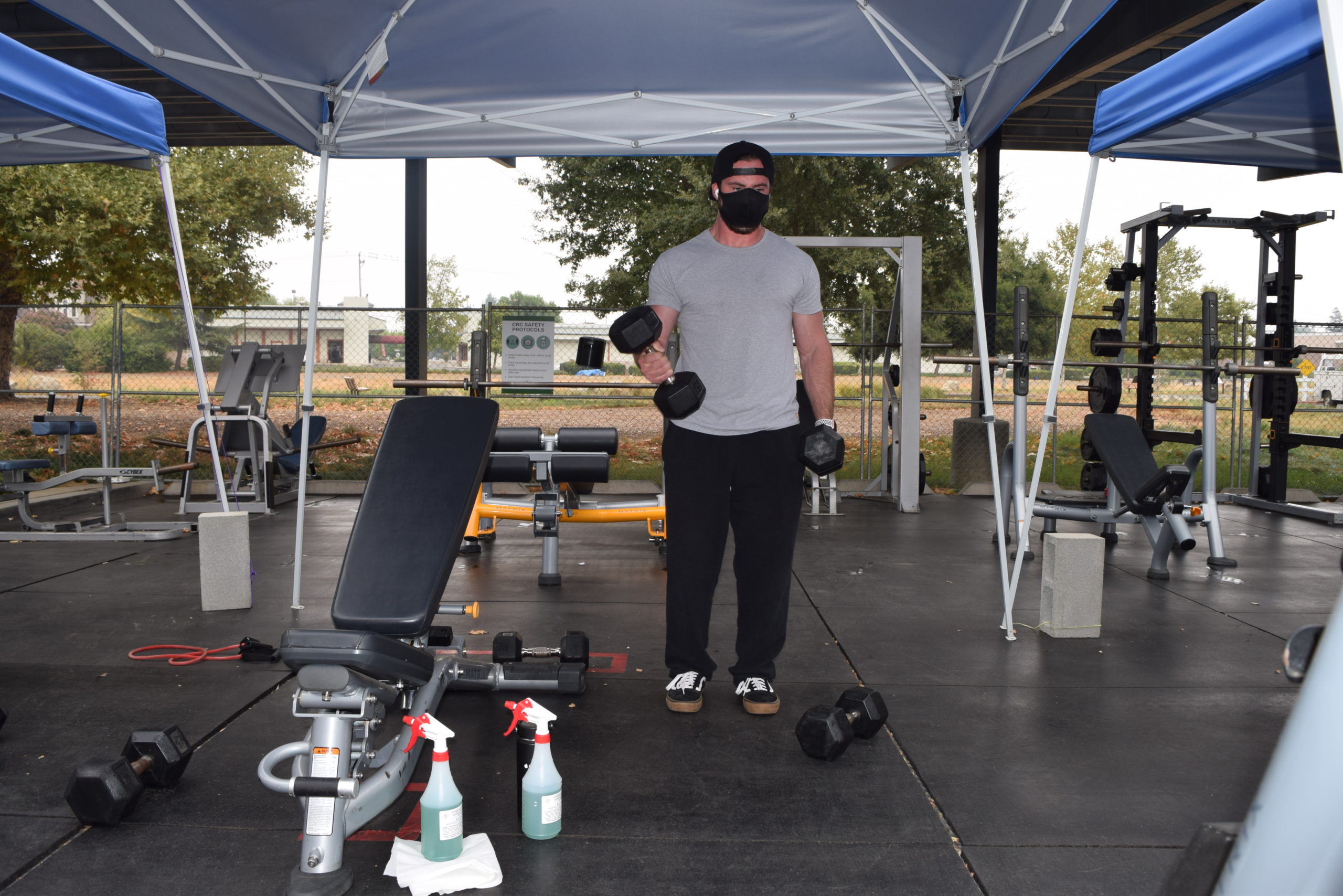 By Robert Airoldi and Marty Cheek

After months of being shut down due to the COVID-19 global pandemic, some businesses have finally been allowed to reopen, albeit outdoors.

CRC staff was conducting virtual classes just to keep in contact and began moving equipment around in late May in anticipation of being allowed to open indoors using social distancing protocols. But then Gov. Gavin Newsom issued an order denying gyms the ability to open at all. They remained closed for months. Then in mid-August an order came from Gov. Newsom, allowing gyms to open outside.

“We had a week to turn everything around and move everything outside,” said Jennie Tucker, recreation manager for the CRC. “It was a total team effort that include electricians to come out and set things up for the cardio equipment and our IT team for check in.”

The machines and free weights were moved to the fenced parking lot under the solar panels while the cardio equipment is located on the outdoor pool deck. Both areas are covered with pop-up tents to provide shade and allow the breezes to flow through, she said. Group exercise classes take place in the parking lot and in extra space at the Aquatic Center, which has been open for some time for lap swimming and water aerobics.

The center opened Aug. 20 on a reservation system with a maximum of 60 people, Tucker said, adding that they see about 25 people at a time so there’s plenty of room to space out. Everything’s done online.

Richard Robinson, a Morgan Hill resident who joined the center in June, was happy to be exercising after he was forced to work from home and his gym in Cupertino closed.

“I’m very impressed,” he said. “The gym is a good way to get the stress out during these stressful times.”

Morgan Hill Brett Erickson, who joined the center when it opened more than a decade ago and visits about three times a week, agreed.

“It’s really nice,” he said. “There’s only so much you can do at home to stay in shape.”

Maureen Tobin, communications and engagement director, said revenue related to recreation is third largest source for the city, so it’s important to reopen.

“The fact we are able to bring back the membership and perhaps some new members that really is important to overall revenue for the city,” she said.

Meanwhile, the Community and Cultural Center remains closed for rentals, though they have allowed  small gatherings at the outdoor amphitheater. The skate park is open from 8 a.m. to 8 p.m., and tennis courts are also open. All facilities require social distancing and face coverings.

“Everything we’re doing feels safe,” Tucker said. “If someone is hesitant we tell members to come down and check it out. Everyone’s wearing facial coverings and it’s a safe environment.”

There will be some good things that come out of this, she added.

“I was at one of the first in-person classes and there were people crying they were so happy to be back and get that connection,” she said.

Over at the library, story time, book clubs and other programs were quickly switched to online after the mid-March shutdown orders were given. During the ensuing months, they increased offering some services and e-books. But now that curbside service is allowed, they are bringing some sort of human connection back to the library.

Library patrons can either drive up in their vehicle and a staff member will come out and put your materials in your vehicle, or you can walk up to the building and get materials at the front entrance.

“The county and library have been really supportive in quickly pivoting resources toward having staff doing virtual reference and clerical staff talking on chat and phone and email and answering account questions and learning Zoom programming,” said Heather Geddes, Morgan Hill librarian. “It was a big learning curve for everybody.”

Curbside service is available from 1 to  5 p.m. Monday through Saturday. They plan to offer some nighttime hours this month for those who are working and can’t make it during the day.

“It seems to be really well received,” she said. “We are busy the four hours we are offering services, as are all (county) libraries.”

She said all materials returned are quarantined for four days, as the latest research shows that is the maximum amount of time the virus can live on various surfaces.

As far as helping students, the library has research tools and free, live online tutoring available, Geddes said. They will also be extending their Wi-Fi capability out into the parking lot for those without service to use.

“It truly has been a positive thing to see our patrons and residents come back to the library even for curbside service,” Geddes said. “Staff enjoys the opportunity to get services and material resources into the hand of everybody and that’s been fantastic and everyone has been appreciative of our services.”