Faith Joy Dantowitz is getting to know the congregation, virtually 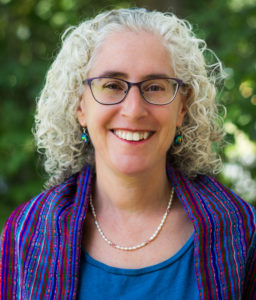 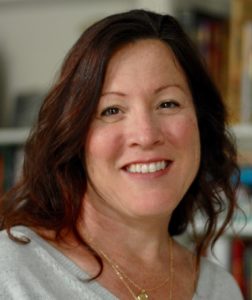 Leading a congregation that serves the South Valley’s Jewish population during a global pandemic poses a unique challenge. Faith Joy Dantowitz, the new rabbi at Congregation Emeth in Morgan Hill, looks forward to building relationships, getting to know each member and their passions and interests, as well as sharing her own stories to weave together a strong community.

“To build is a blessing,” she said.

Hailing from New Jersey, Dantowitz, 55, most recently served as the associate rabbi at Temple B’nai Abraham in Livingston, N.J. Since moving to the Bay Area on July 1 with her husband, Dantowitz has been spending a lot of time on Zoom, the phone, and on Facetime getting to know the congregants one on one. Congregation Emeth, which traces its roots to 1976, has a membership of about 90 households.

“I’m looking forward to building relationships and meaningful experiences in the years ahead,” Dantowitz said of her new post.

A culmination of many positive Jewish experiences — including chairing the Student Struggle for Soviet Jewry as an undergraduate at the University of Pennsylvania, visiting Israel, and attending and working at a Jewish summer camp — coupled with her love for Judaism led Dantowitz to pursue rabbinical school.

“As a rabbi, I get to interact with people of all ages and experiences and have the opportunity to not only lead a community but honor the individuals who are part of that community and build strong connections,” she said.

Dantowitz lives in Cupertino with her husband, David. They have four sons. In her free time she enjoys bike riding, swimming, walking, yoga, and meditation. Pre-Covid-19, she liked going to the theater.

As she settles into her new role at Congregation Emeth, she’s eager to get to know people she will serve, the members of her community, and the other members of the interfaith community in South County.

Growing up in a strong Reform Jewish household, being Jewish was a significant part of her identity from an early age. She recalls her family hosting a Russian family in the 1980s when her family’s synagogue welcomed Soviet refugees. 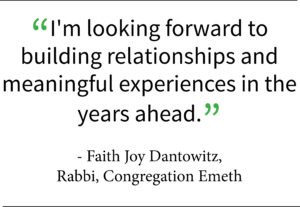 After earning her degree in engineering from the University of Pennsylvania, she decided to pursue doing full-time what she loved doing part-time. She became ordained in 1993 at the Hebrew Union College-Jewish Institute of Religion.

Dantowitz has rallied behind many causes throughout the years. These include the plight of Soviet Jews, immigrants’ rights, marriage equality, and gun violence prevention.

One of her proudest moments was being present  when New Jersey Gov. Phil Murphy signed a landmark gun safety law following the “Do Not Stand Idly By” campaign, which Dantowitz helped bring to New Jersey.

Dantowitz said she grew concerned about gun safety after the Sandy Hook Elementary School shooting in Newtown, Conn., in 2012, which killed 26 people, including 20 children. It was a tipping point for her to take action as a faith leader.

“It ate at my heart after the Newtown shooting happened. It was an issue I cared about,” she said.

The gun safety campaign’s origin is linked to Leviticus 19:16, which states: “Do not go around spreading slander among your people, but also don’t stand idly by when your neighbor’s life is at stake; I am Adonai.”

Asked what advice she would give to young women as they choose their future career path, Dantowitz suggests they pursue their passion while reaching out to others as mentors, who can offer guidance and support along the way.

“There’s not one key to success. Listen to your heart and there are times when compromise is needed,” she said. “I think it’s really important to have mentors and friends along the way and be willing to share your wisdom with people who can learn from it.”

Kelly Barbazette, a former journalist for Bay Area newspapers, is a freelance writer. She lives in Gilroy with her husband and two daughters.