Contributed by the Morgan Hill branch of the AAUW 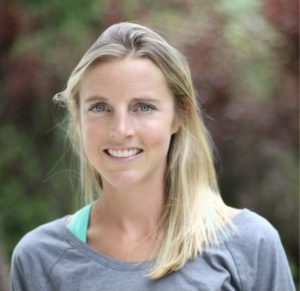 On March 16, Dr Stephanie Marie Howe presented an AAUW webinar about nutrition and how to use it to promote optimal athletic performance and health throughout life. It was held in time to benefit participants in AAUW’s 2021 Virtual Wildflower Run being held March 20-28.

Stephanie Howe is a professional ultra-marathoner, coach, and doctor of nutrition and exercise science. She knows how to win, having finished first in the 100-mile 2014 Western States Run and setting track records in other marathons like the Lake Sonoma 50-Mile and Bandera 100k. Stephanie loves running and loves the places she sees on foot, but she didn’t always like it.  In 7th grade when her parents took her to a run practice, she wore flip-flops so that she wouldn’t have to participate.

Yet her love of the outdoors and the camaraderie of playing on girls’ softball teams led to her discovery that she was a talented distance runner. It came as  a surprise. She had considered herself a good runner but didn’t really enjoy it. Then in her junior year of high school, Stephanie joined the Nordic cross-country team. Her aim was to experience the joys of being outdoors and part of a team during the winter, just like she did when playing softball. She found that the solitude of running the long distances required for training and skiing cross-country appealed to her, made her feel free, and helped clear her head. So, even though it was hard, Stephanie said good-bye to softball and spent her senior year as a cross country track runner.  She was awarded a college scholarship for Nordic cross-country skiing and never looked back, eventually becoming a two-time All American athlete in both cross-country skiing and running. She had found a passion that guided her educational choices for the next ten years, culminating in a PhD in Nutrition and Exercise Physiology.

These days, as a professional athlete, Stephanie has created a special niche for herself by focusing on how to use nutrition to enhance running endurance. Her expertise in nutrition and exercise physiology has made her a proponent of using “real foods” to provide nutrition for athletic performance. She doesn’t believe in extreme diets and instead recommends eating enjoyable, uncomplicated foods. When asked what she would choose as her sole race recovery food for the rest of her life, she answered “chocolate milk.” This is emblematic of her approach to incorporating running into a healthy lifestyle. She wants people to think about running as just one of many things that a person does, and not to adopt an adversarial relationship with food. As a coach, she encourages her clients to listen to their bodies, to tune into the joy of running and to relinquish beliefs that lead them to push their bodies to unhealthy extremes. Resting after a race and allowing the body to fully recover is important in her own training practice, which incorporates yoga and mindfulness.

Besides being a coach and professional athlete, Dr. Howe is a new mom with an infant son. This has led her to apply her nutrition expertise to herself while pregnant.  Other pregnant women runners should find her nutrition and running advice very useful.  If you’re a runner, or know a runner who is a child, teen, adult or senior, you’ll want to listen to a recording of her talk by selecting this link: https://www.youtube.com/watch?v=050InzJtGV8

Yvonne Randolph is an AAUW board member.