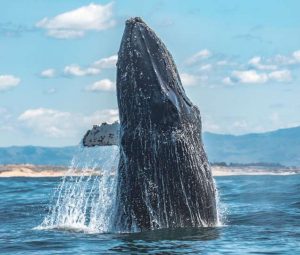 Majestic blue whales are found throughout the world’s oceans — and yet there are only some 25,000 left in the world. If people aren’t more aware, then they can’t care. If they don’t care, then these ocean giants may be gone before we even grow up.

Our Mount Madonna School fifth grade class is working to bring awareness about this endangered marine mammal in hopes it will inspire others to take action to protect it. We have dedicated many months of work to our project. We wrote research reports and made slideshows to teach each other about the blue whales, their habitat and threats.

We made a plan of how to help whales. We created a company and called it People of the Rockin’ Whale. We decided to make a movie to teach people about whales and how our every-day actions can help whales and the oceans. We can save them by simple, everyday choices such as using less plastic or knowing how your seafood is caught. Each and every action we all make can make a difference.

We really wanted to have fun with our movie, so we made a parody of the “Wizard Of Oz” called “The Ocean Of Oz.” In our movie, the character Dorothy is a student who does not care about her actions and thinks conservation is impossible. She is swept

off into the ocean of Oz where she meets Glinda the Good Fish and some friends who help her realize the threats blue whales face. She has to battle the Wicked Witch of Waste and make her way to the great and powerful Oz in order to get back home.

Another big part of our project was working with our elected representatives to enact laws to protect whales. Congressman Jimmy Panetta contacted us and said he would like to meet with us about our idea to establish a National Blue Whale Day.

Why do we want a day to recognize blue whales? To help spread awareness on how peoples’ actions and choices affect marine life. We also hope it will make more people inspired to help protect the whale. These animals face many terrible threats, including entanglement, ship strikes, plastic pollution, and noise pollution. Even worse is most of these threats are caused by us, so we want people to know they can make small changes that can make a big difference.

Entanglement is when the whale gets stuck in all kinds of nets or fishing gear like crab pot lines. The most common nets that cause harm. We want people to be aware that they can help stop this threat by being responsible with their fishing gear and being more aware of how the fish they eat are caught.

The next threat is ship strikes. We can prevent ship strikes by changing ocean cargo routes to go a different way from the route the whales take when migrating, feeding or breeding.

The third threat is noise pollution of a ship’s engine which is a very loud sound whales can hear. Some noises can be so low or so high it shatters the whale’s ear bone. This can kill the whale because they communicate in a very low call. If the noise is extremely low it can confuse the blue whale and make them think that another whale is calling them, so they follow the noise and might be hit by the ship and die. How can we stop noise pollution? Again, we can move ships away from blue whale migration areas or maybe change the sound of horns to be less confusing to the blue whale and not as loud.

Lastly, is plastic pollution, which is one of the worst threats to all sea creatures. It is caused by our choices. A blue whale on average eats about two to four tons of krill each day, and in some bites (maybe even each bite) they consume plastic. Blue whales are filter feeders which means they open their mouths really wide and gulp all the krill and water along with it. This is when the blue whale can swallow a lot of plastic. Since there are 125 trillion pieces of plastic in the ocean, most likely every bite has plastic in it. This is terrible because when animals eat plastic it feels like they are full and have eaten a lot, but it’s actually just the plastic stuck in their stomach. This can starve and kill them. We can stop plastic pollution by using alternatives other than single-use plastic.

For our Zoom meeting with Congressman Panetta, we were very excited. We each made questions to ask him and we took notes on his responses. Panetta explained the process of making laws and told us that he supported the idea of a Congressional Resolution for a National Blue Whale Day, and he would share our project with other Congress members to see if they would support the idea. He said his own household has a recycling practice, and his family is doing what they can to limit their waste.

He told us he was working on an environmental project as well, protecting monarch butterflies because they are being affected by climate change and where they migrate the temperatures are changing, confusing the butterflies. We thanked him for his interest and he told us he would do the best he can to help people recognize and protect blue whales.

So what do you say? Will you join us in helping to protect blue whales?