20th class called the most diverse ever in terms of race, gender and opinions 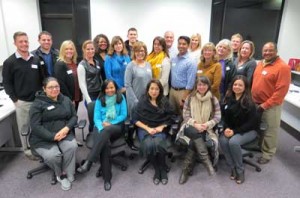 The on-going joke in Leadership Morgan Hill is that many of its alumni tell people that their class, which ever year it might be that they went through the annual local leadership training program, was “the best class ever.” No doubt when they get their certificates at their graduation ceremony at Guglielmo Winery in September, members of the 2015 Leadership Morgan Hill class will tell people the same thing.

The 22 people of that class met at Anritsu’s Morgan Hill headquarters Jan. 5 for their first day together launching the nine-month program that will teach them about various components of the community and how they are involved in the quality of life for all residents. Among the 2015 class members was Deborah Frazen, the deposit relationship officer at the Morgan Hill branch of Heritage Bank of Commerce. She looks forward to learning more about herself as a leader both on a personal and professional level, she said of her involvement in the program.

“I definitely don’t want to be the president of the United States, but I’d like to be able to get in front of the group and talk and develop my confidence in public speaking skills,” she said. “Leadership Morgan Hill is a great opportunity to meet new people. I’m excited and looking forward to it.”

In last year’s class, fellow Heritage Bank employee Katie Garcia enjoyed the experience and talked highly about it to Frazen, encouraging her to get involved in the 2015 class, she said.

Leadership Morgan Hill Board President Rene Spring said this is the 20th anniversary class and he’s “extremely excited” to see how the various members evolve in their leadership skills. The members were picked to represent the diversity of the Morgan Hill community, he said.

“The program has been around since 1995. We have close to 400 alumni,” he said. “I think we have one of the most diverse classes this year as regards to gender, race, views, opinions, professions … it’ll be exciting to see them work together.”

Spring calls himself “a poster child” for Leadership Morgan Hill, graduating from the class of 2012. He joined the program after living in Morgan Hill for seven years and decided he wanted to find out how to be involved with organizations to make the community better.

He found Leadership Morgan Hill opened the door to experiencing the community in a new and fun way and provided a network of new friends and community member relationships.

“Our mission is to really ignite the passion of people in Morgan Hill and have them move on to other organizations and become board members or volunteers and be engaged citizens,” Spring said.

Throughout the year the members will take a monthly day-long class on Fridays where they will get in-depth training on various aspects of leadership such as a local government day, an education day, a public safety day, media day and the local economy day. Monthly Monday evening sessions will brief the class members on such aspects of Morgan Hill as its history, the various nonprofit organization volunteer opportunities, and the environment.

As part of the program, the class will need to work together as a team on a project that provides community benefit to the people of Morgan Hill. In the past, classes have provided art work for the Morgan Hill Public Library, rehabilitated and upgraded the exterior of downtown’s Grange Hall, provided renovations for Machado School, and created the Volunteer Morgan Hill program.

The class and its curriculum is facilitated by Morgan Hill resident Theresa Kiernan who graduated from the program in 2007. She is impressed with the diversity of the class members and said it reflects Morgan Hill’s community spirit.