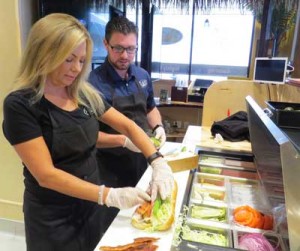 Debbie Quarles admits that’s she’s “sandwich crazy.” The owner and operator of Morgan Hill’s Beach Hut Deli in September opened her restaurant for people who share her passion for gourmet sandwiches that make the usual fast-food menu offerings pale in comparison. In the past five months, the deli has become a popular local hangout to enjoy a fun meal while catching a sports game.

“We have the best sandwiches on earth, I always start off praising our product,” Quarles said. “I’m a sandwich-crazy person.”

Beach Hut’s sandwiches start with high-quality bread which is made exclusively for the 35-store franchise by the Truckee Sourdough Company. The soft bread is hearty with flavor and able to hold a huge amount of fillings.

“Everything that we put on our sandwiches is sliced fresh, all our meats and our cheeses, all of our produce,” Quarles said. “Nothing comes from a bag. We’re all about freshness and quality and that makes our sandwiches insanely good.”

Quarles discovered Beach Hut Deli for the first time four years ago when she and her family were driving to Lake Tahoe and took a random freeway exit in Sacramento for a lunch break. Her husband saw the Beach Hut Deli sign and suggested trying it.

With a laugh, she recalls telling him: “No, I want to go to In-N-Out Burger next door.” He pushed her to try the new restaurant. When she walked in, she was amazed by the fun tropical ambiance. She ordered a Hobie – a hearty classic Italian deli sandwich bulging with salami, pastrami, and provolone accented with Italian dressing.

“That was the (Beach Hut Deli) sandwich I had for the very first time and I went, ‘Oh my God, this is the best sandwich I’ve ever had,’” she said.

The idea to purchase a franchise was planted and that led to her opening her first restaurant in the Evergreen area of San Jose three years ago.

That deli was so successful she decided to expand to Morgan Hill because it has a small-town environment she thought would make a good fit. Customers who walk into the deli find a place where they can relax with family and friends at the bar or at alcoves with tables shaped to resemble surf boards. Each of these tables features a small flat-screen TV. Music usually plays on the deli’s stereo, but when a big game is on, management switches to the TV channel. Children can play with their parents in the “beach” — a sand-lot located outside the entrance. Adding to the playful beach theme, sandwiches are served on Frisbees.

“I would describe it as a vacation away from home,” said Beach Hut Deli General Manager Blake Markowski. “You get in here and you kind of have this relaxed ambiance. And with the over-the-top customer service, it feels like you went to Hawaii.”

Beach Hut Deli serves alcohol drinks focusing on Bay Area brews and local vino such as Jason Stephens and Guglielmo Winery’s Cabernets and Chardonnays. The deli changes its selections on a regular basis to encourage customers to try new ales and wines.

The price of the sandwiches starts at about $4. Sandwiches are generally more expensive than the fast-food shops but that’s because Beach Hut Deli uses high-quality fresh ingredients and takes extra time crafting a perfect sandwich that Quarles said resembles a culinary work of art.

“We say we build our sandwiches, we don’t just slap the meat on and wrap them really quick,” she said. “We want every customer to walk up to that counter and say, ‘Wow!’ That’s the reaction we want.”

The deli often offers $2.50 beer specials and gives a 10 percent discount to diners who come in with a day-of movie ticket from the CineLux Plaza Theater next door.

“We offer a lot of specials,” Quarles said. “Kids eat free on Mondays. Tuesdays it’s family night because we’re partnering with the CineLux movie theater. We have a lot of specials with our happy hours.”