Hundreds of South Valley residents braved the winter chill to honor more than 1,000 deceased veterans in several cemeteries by laying Christmas wreaths on their graves the morning of Saturday Dec. 10. The annual Wreaths Across America event brought families and individuals together in somber ceremonies placing the holiday decorations at St. Mary and Gavilan Hills cemeteries in Gilroy and Mount Hope Cemetery in Morgan Hill.

“The mission of Wreaths Across America is to remember and honor those who serve,” Johnson said. “We also want to teach our children to consider their sacrifice through the wreath-laying ceremonies across the country. Our kids need to learn that freedom isn’t free.”

This year marks the 25th anniversary that the wreaths were first laid out in Arlington Cemetery in Virginia.

The event spread across the United States over the next quarter century. Dec. 10 about 800,000 wreaths were placed around 1,200 cemeteries in America. Last year was the first time the event was held in the three South Valley cemeteries.

“Wreaths Across America continues to grow as people embrace its mission,” Johnson said. “It’s only natural that people are drawn to honoring our vets because it’s simply the right thing to do.”

Contributions from businesses, veteran groups and individuals went to the purchase of the wreaths, which cost $15 each.

Morgan Hill City Councilman Larry Carr attended the Mount Hope Cemetery laying of the wreaths and said he was impressed with the nearly 100 people who braved the cold to attend. 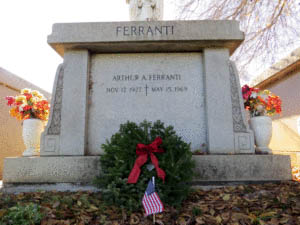 A wreath adorns the grave of a local veteran.
Photo by Marty Cheek

Carr said he was glad to see children of various ages as wreath-laying participants because it is important for young people to understand the struggles and sacrifices veterans and holidays go through.

It’s especially important to remember the deceased with the wreath ceremony because Christmas time can be emotionally painful for families who have lost loved ones in conflicts around the world, he said.

“During this holiday time, it becomes a very busy time and sometimes we can forget where our focus should be instead of where the commercial world would like it to be,” he said. “Today we remember the sacrifices people made to allow us to enjoy the lives we have today.”

Wreaths Across America is a way of honoring those who served and who still serve in our Armed Forces, said Mark Turner, CEO and president of the Gilroy Chamber of Commerce and an organizer of the Gilroy ceremonies in the South Valley.

“We encourage individuals and businesses to participate because it’s a great way to remember what military men and women have done on our behalf,” he said. “Equally if not more important is including young people so they can be taught the valuable lesson that freedom isn’t free,” he said. “It helps to put into perspective that real heroes don’t throw touchdowns, hit home runs or sink three pointers, but serve in our military, protecting and sacrificing for our values and freedoms.”

Turner’s father, William Turner, a former member of the U.S. Marine Corps, played a big role influencing his sense of patriotism. The veteran flew the flag every day in front of the family home and taught his son that America provided the greatest opportunities for everyone.

“He instilled in me an appreciation for our military personnel who were and are the guardians of all that we hold dear,” he said. “My effort in Wreaths Across America is as much a tribute to him as it is to all veterans.”