In addition to polo, the club offers boarding, horse care, lessons, and clinics If you hear the word “polo” and have an image of snooty ladies in couture apparel and wide-brimmed hats alongside ultra-rich trust fund gents with pricey sports cars, you’ll be pleasantly surprised to learn the South Valley has its own polo club — one that’s shattering stereotypes about the Sport of Kings faster than you can saddle up and play a chukker.

Located at 1290 Masten Ave. in northeast Gilroy, the South Bay Polo Club is a welcoming experience that feels more like a friendly group outing than a high-society event. And that’s just fine with its members, and those who come out to the bucolic setting to watch and learn.

“We’re a very social club. We say come for the polo and stay for the party,” said owner and club manager Francesca Finato.

True to form, after weekend matches, the polo players usually have a barbecue in the shaded picnic area near the field. On weeknights, they go out for drinks or dinner.

“We’re a very dysfunctional family with a polo habit,” she quipped. “No one takes themselves too seriously.” 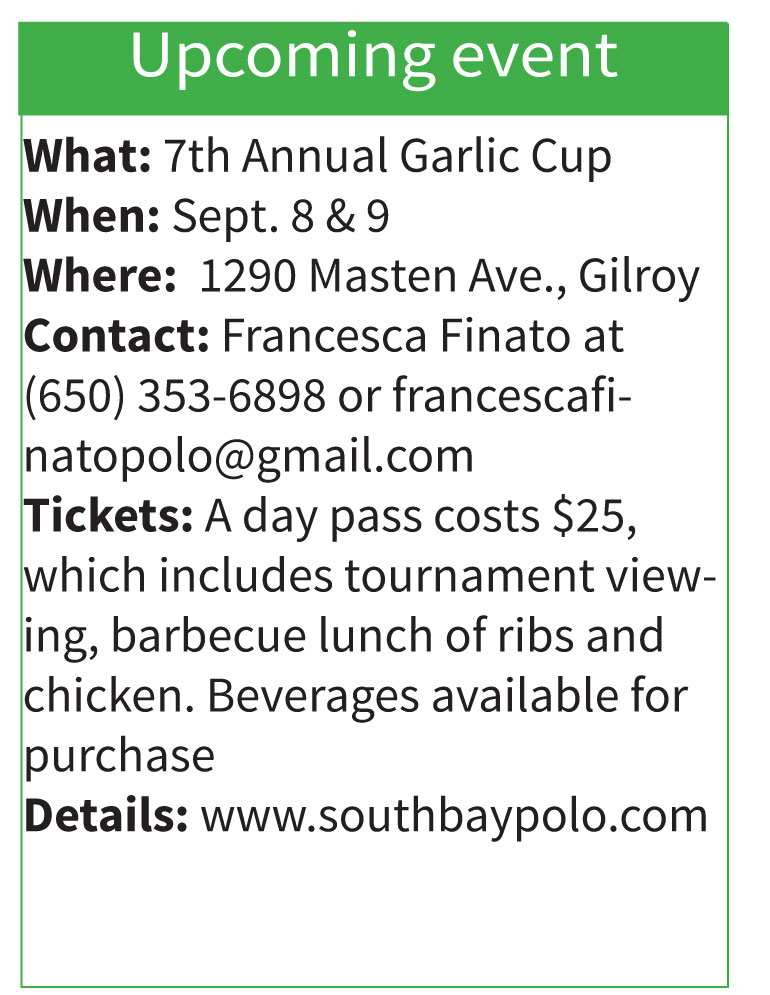 Veteran players with a passion for the sport are always encouraging new players. They coach a bit, pass on the traditions — as it was surely passed on to them when they first started — and discuss technique and equipment.

The polo club began in 2012 at a full-service horse boarding ranch. It offers a full-sized polo field, as well as a covered arena that lets them play year-round.

One of the founding members, Tim Westin, put things together and then moved to Southern California.

Finato played for three years on the women’s intercollegiate polo team while she attended Cal Poly in San Luis Obispo. She had been working as the South Bay Polo ranch manager when she decided to focus solely on the polo club.

“It’s a labor of love, and I’m so glad I did,” she said. “Tim left us with this gorgeous field that we just have to maintain.” She also looked to Erik Wright, of Wrightway Polo, as a mentor and influence. Photo by Marty Cheek
Two riders race for the ball during a recent polo match.

Finato said there has been “no pushback because of my gender. It’s kind of an aggressive sport, full contact. There are lots of Type A personalities. You just have to rise up to that. It takes a certain personality to be assertive.”

She sees plenty of venture capitalists, doctors, lawyers, and tech professionals in her clientele. Dale Johnson, who lives in San Francisco and works as a senior data analyst for a Dutch payments firm, just started playing polo in May. He previously trained in Olympic lifting and takes English riding lessons in Pacifica. But he makes the trek to Gilroy to “stick and ball” with South Bay Polo Club.

“With polo, you work on balance and strength at the same time,” Johnson said. He kindly explained the nature of the game and exchanged advice with fellow players. A true data analyst, Johnson tracks his progress on a spreadsheet. “When you know your weaknesses, you can be deliberate in practice,” he said.

When Finato recommended adjustments he could make to his canter, Johnson eagerly listened, appreciative of the instruction.

“These are strong people who are masters in their fields, great competitors,” Finato emphasized. “But the beauty of polo is that stressed-out corporate guys get on a horse and forget about things. You have to stay focused 100 percent on the horse, the game, the strategy. There’s no time to think about anything else. That’s why it appeals to people in high stress jobs.” 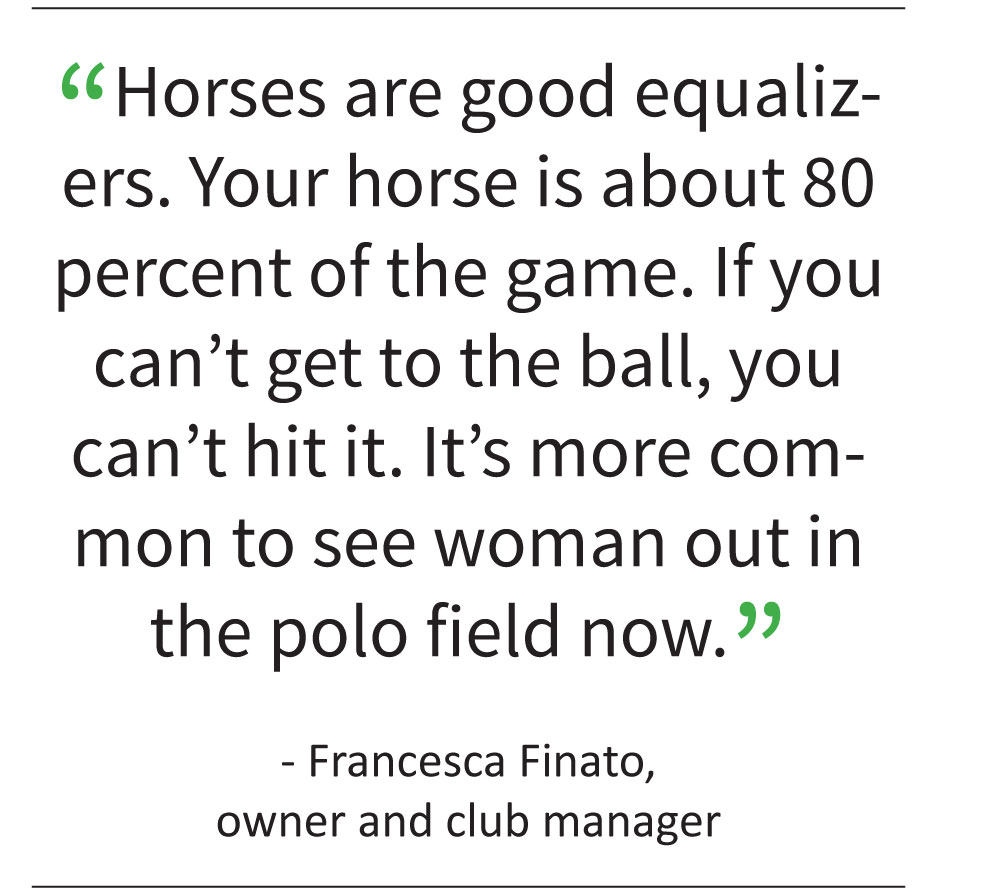 Despite the sport’s reputation, many people are surprised that it doesn’t take an exorbitant amount of money to play polo these days.

You can play a full game and have two horses with a little expendable income. For example, for $200 per session, South Bay Polo Club offers Introduction to Polo clinics every Wednesday night at the Horse Park in Woodside. The clinics run through September. The $200 fee covers a horse and everything you need, and you can play the first day. It’s a fun way to get introduced to the sport.

Or, you can come to South Bay Polo Club and get private instruction for $125 per lesson. These also include everything needed. Each rider is different. Some will be ready to play after a couple of lessons. Some take longer.

South Bay Polo Club has a full lease string of 10 horses. If you have your own horse, they can board it for you. Finato calls it a “turnkey operation.” Just show up and get on it.

Another surprise is that women are the fastest growing demographic in polo.

“Horses are good equalizers,” Francesca said, explaining the reason why women are getting into polo. “Your horse is about 80 percent of the game. If you can’t get to the ball, you can’t hit it. It’s more common to see women out on the polo field now.”

Sixty-one-year-old Ann Terranova is a perfect example. A financial planner with an office in San Francisco, Terranova hadn’t even thrown a leg over a horse until the age of 52. Her son says that polo is his mom’s answer to the empty nest.

Terranova never looked back. She started playing polo a few years ago and created the life she always wanted to live. She’s seen benefits on and off the field.

“The payoff is that this is something physical,” she explained. “It’s breathing, it’s sweaty, it’s pushing yourself to the limit, it’s being spent. And it’s a team, with sportsmanship. And, you have to suck it up and be nice, but you can still be competitive.”

Terranova plans to move to Gilroy and buy a ranch so she can be close to the four horses she owns. But aside from the polo field, there’s also a deep emotional connection.

“Horses feed your soul. They’re majestic, and magnificent,” she said. “Every time I gaze at them, my breath is taken away. It’s about being the boss but listening to what they’re telling you, so you can be a better boss.”