Rotarians give food, friendship to homeless on Christmas Day 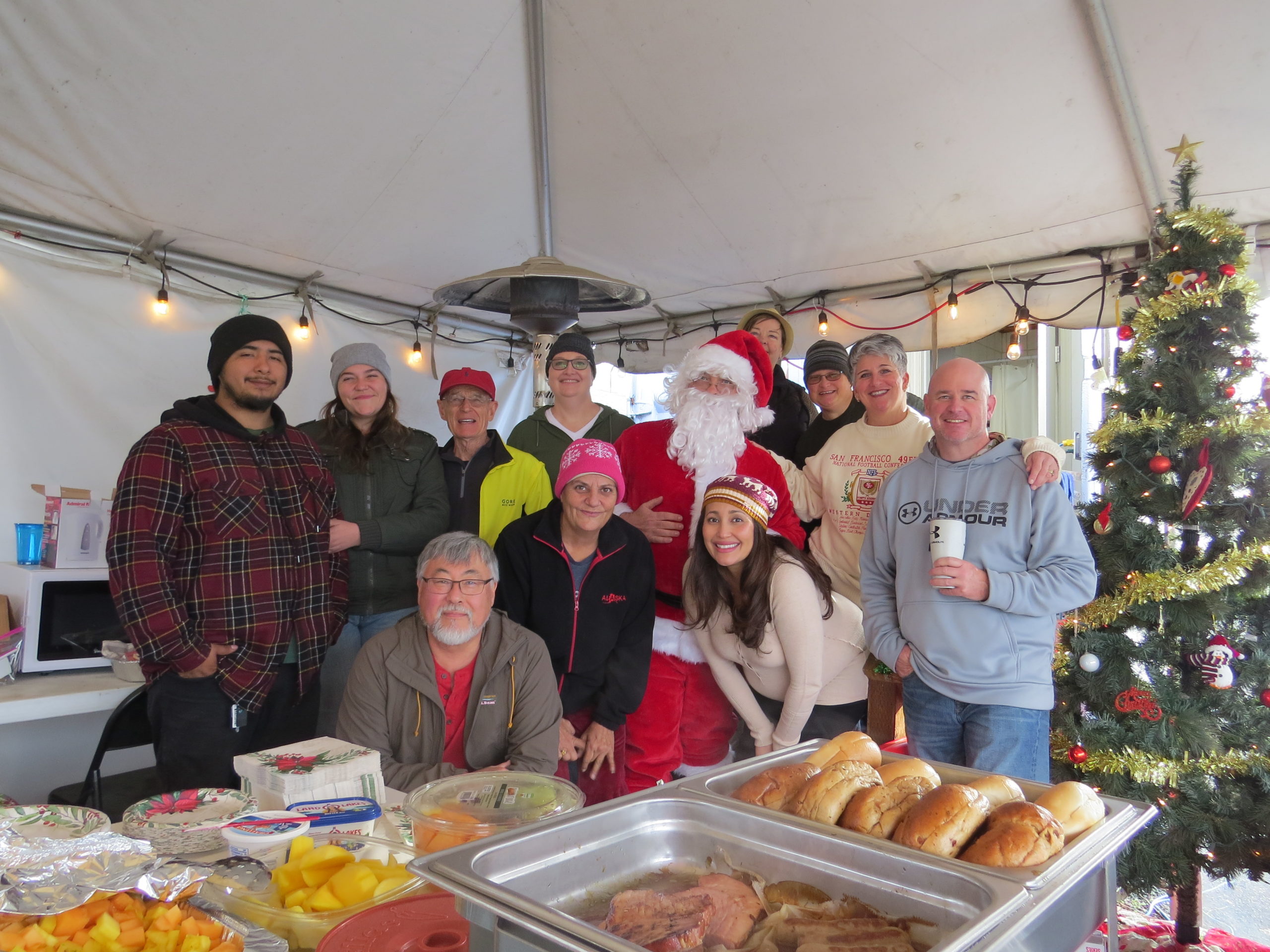 Volunteers and clients of the Safe Parking program at the Morgan Hill Bible Church pose with Santa Claus at the Christmas Day breakfast.

Christmas celebrates a story that starts with a search for shelter. After Joseph and Mary are turned away from a fully-occupied inn, they spend the cold night in a warm manger. Their child is born among farm animals in their temporary housing.

The story of the birth of Jesus provides the world with a lesson on compassion. It’s a lesson many in Morgan Hill take to heart. It reminds them that part of their duty as a community is to care for those who lack housing and are forced to live on the streets in sleeping bags, in their cars, or on the side of creeks in tents.

Among those who demonstrated their compassion this year are members of the Rotary Club of Morgan Hill. The service group organized a special Christmas Day breakfast to provide food and friendship to people who find shelter in the trailers and recreational vehicles in the parking lot of the Morgan Hill Bible Church.

Among those who helped in the cause of compassion was Rotarian Mario Banuelos who provided fresh fruit and paper plates for the breakfast. Served at 9 a.m. in a covered patio area, the meal included ham, sausages, bagels, a home-baked frittata, roasted potatoes, juice, coffee and hot chocolate. All were provided by volunteers who sat at the tables and enjoyed the breakfast chatting with the clients.

“Christmas is a time for peace and hope, and a lot of people need hope during these times,” he said. “It’s very difficult economically for a lot of families just to get by, so it makes me feel good (to be involved). It really is the meaning of the season to look beyond ourselves and be thankful for what we have and share of our abundance.”

The Rotary’s mission is “service above self,” a motto which resonates with Banuelos. Club members look for opportunities in the South Valley community to give back to have an impact. That purpose for making a difference helped inspire the Christmas breakfast. Members like Banuelos hope the project might grow where volunteers can give assistance to the homeless throughout 2020.

“We need to be aware that they’re here throughout the year, it’s not just during the holidays,” he said. “As we come to the end of the year, we like to reflect on what we’ve done in this past year, and that’s important because it kind of gives us some direction.”

Not only food and beverages were provided but 20 blankets with a jolly Christmas theme. Children received soccer balls and a bean-bag toss game as well as fun-to-read storybooks bought by the Rotary from BookSmart. The Rotarians also provided a storage shed to hold the library of books.

Among the organizers of the Christmas Day breakfast was Rotarian and Morgan Hill City Councilmember John McKay.

“The goal of this whole thing was to make everyone feel like they would if they were in a home, as if this was your house or my house,” he said. “We’re trying to make this as normal as possible.”

The idea to provide Christmas cheer to the occupants of the Safe Parking Shelter program came about when the Rotary invited Rebecca Garcia, the housing manager for the city, as a guest speaker. After she talked about the homeless issues in the South Valley, the Rotarians asked what actions the club could do to make a difference that went beyond just writing a check.

“What Rotary likes to do is have hands-on projects,” McKay said. “What we want to do is interact with the people in the community. And this is an opportunity where we can make a difference on a small scale. It’s really nice that we can work together and make a real difference in the community. Rotary showed a tremendous amount of interest in helping the homeless community.”

The trailer shelters serve as a “first line” in helping the homeless in Morgan Hill, he said. The property is located in the county just south of the city limit. Special permits from the county were obtained to allow people to live in the trailers placed on the parking area behind the church.

Rebecca Garcia helped in preparing the breakfast by getting coffee and hot chocolate at a local Starbucks. A young girl inside the shop saw her hands were full with the beverages and offered her help to bring them to the car. Garcia told her: “By the way, these are going to the homeless.” And the girl said, “Ah, that’s awesome. I wish I could go with you.”

The girl’s comment demonstrates the spirit of compassion many people in the South Valley community feel about helping their fellow humans who have to struggle with life’s uncertainties, she said.

In July, Santa Clara County released its 2019 Point-in-Time count report, a biennial attempt to tally the homeless population. It showed the number of homeless people spiked dramatically in some north county cities. San Jose counted 6,097 homeless individuals this year. This is up 41 percent from 4,350 in 2017.

The count showed 114 homeless people in Morgan Hill this year. This compares to 81 homeless individuals in 2015 and 388 homeless people in 2017. The sharp increase in 2017 was due to an anomaly when several weeks before the 2017 count took place, the Thousand Trails RV park flooded from winter rains, forcing dozens of RVs onto city streets.

California has about 250,000 homeless people, about half of America’s total homeless population. A recent report of the communities in the state that are best handling their housing challenges gave “A” grades to 50 cities. Morgan Hill was the only city in the county that received an “A.” This grade shows the character of the community, Garcia said.

“What I love about Morgan Hill’s approach to addressing homelessness, we tend to tackle things on a smaller scale and focus on a smaller number of families,” she said. “When this (car park shelters) originally started out, it was for eight families, which may not sound like a lot but that’s 30 people every night who have a place to sleep in a safe place where they’re welcomed.”

Members of faith-based organizations bring them meals during the week, a way to make sure the people staying in the trailers feel that they are connected to the community

Homelessness is a crisis situation throughout California, and many experts believe the solutions must come on a local level. The city is considering opening a second Safe Parking Shelter spot to help more homeless individuals and families have a safe place to stay at night. Finding the right location is the hardest part in this endeavor. The place needs to be zoned, and if it’s in the county it requires a permit.

“Hopefully, we can do another one sometime soon,” Garcia said. “This is such a great location because it’s back (from Monterey Road) and the kids have a large field where they can play.”

Safe parking programs like those at the Morgan Hill Bible Church can work for some people, but because of the human condition, there is no one-size-fits-all solution. That’s why advocates emphasize looking at different strategies to make progress, she said.

Finding solutions to the homeless crisis in California also requires creativity and a willingness to take risks, Garcia said. Sometimes, members of the public have misconceptions about the problem, which can interfere with providing help. But Morgan Hill is taking steps to reduce the number of people living on the streets, in their cars or along creeks.

“I believe in doing things on a smaller scale to make sure it works, not only for the homeless but also for the entire neighborhood,” Garcia said. “I guess if I had to say one thing, there’s no effort that’s too small.”

One of those efforts includes a group of Rotarians providing holiday cheer to safe parking occupants with a special breakfast — and even a surprise visit by Santa Claus — on Christmas Day.