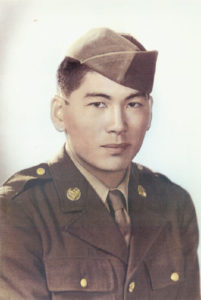 Lawson Sakai as a soldier in the 442nd.

Lawson Iichiro Sakai was a humble man who represented the best of America. He died June 16 at the age of 97.

A resident of Gilroy for much of his life, he often shared with local students and citizens his stories serving as a soldier fighting fascism in Europe during World War II. That was at a time when 120,000 of his fellow Japanese-American citizens were imprisoned in internment camps run by the U.S. government.

He was born Oct. 27, 1923 and raised in Montebello. His “enemy alien” draft status kept him from serving in the military after Japan’s attack on Pearl Harbor. When he tried to join the Navy, he was rejected.

He lived in Colorado for a short time and when the restrictions on Japanese-American citizens serving in the military was lifted, he did not hesitate to volunteer when a special unit was formed in the U.S. Army.

He served in the 442nd Regimental Combat Team, a segregated unit for Japanese Americans. He fought in all major campaigns and was wounded four times. He earned a Bronze Star, a Purple Heart and a Combat Infantryman Badge for his service during the campaigns in Italy and France.

Returning to California after the war, he married Mineko Hirasaki of Gilroy on April 8, 1946. Her father was Kiyoshi “Jimmy” Hirasaki, a nationally famous farmer known as the “Garlic King” because he was America’s biggest garlic grower in the years prior to the war. He helped Gilroy gain its reputation as the “Garlic Capital of the World.”

Photo courtesy Sakai family
Lawson Sakai and his wife, Mineko. Sakai served in the 442 Regimental Combat Team, a segregated unit made up of Japanese Americans during World War II. He died June 16 at the age of 97.

After Hirasaki’s death in 1963, Lawson and Mineko moved into his house located on the east side of Gilroy.

It had served as the Japanese Pavilion at the 1939 Golden Gate International Exposition on Treasure Island. It had its own pagoda and a kozashiki, a traditional Japanese sitting room.

An early-morning fire destroyed the historic house in February 2007. The Sakais got out of their residence safely, but a lifetime’s worth of possessions, including priceless family photos and Lawson’s medals from the war, were lost to the flames. The couple found a new residence in Morgan Hill.

For many years, Lawson and Mineko ran a Gilroy-based travel business until retiring in 1990.

Lawson founded the Friends and Family of Nisei Veterans in 2005, a nonprofit organization dedicated to preserving the legacy of Japanese-American veterans. He was active as a leader of the organization, participating in many reunions and tours to Italy and France as recently as 2019.

“Lawson was a leader,” he said. “He organized his E Company veterans into an active and cohesive group to support each other and to hold reunions.”

In 1992, Lawson spearheaded a project to honor the 442nd RCT by working with East Bay Regional Park officials to plant a redwood tree in Oakland Hills in honor of soldiers who did not come home. The tree has become the focus of the annual memorial service on Armed Forces Day. 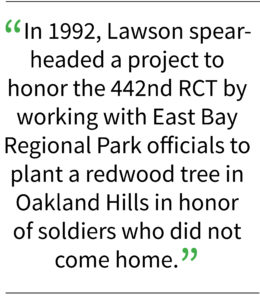 Serving as board president of FFNV until his death, Lawson transformed his E Company veterans group into a newly expanded role by inviting veterans of other companies and the Military Intelligence Service veterans who fought in the Pacific to functions, Shiroyama said.

“I was able to vicariously enjoy his glory by just being everywhere with Lawson. I lost count, but I know I have heard him speak at least a million times,” he said with a chuckle. “His speeches were always genuinely inspiring.”

Lawson eloquently communicated his fundamental message — he and his fellow Nisei veterans fought to prove their loyalty to this country even while their families were still in internment camps, he said.

In 2005, FFNV faced an interesting but daunting challenge. Members were asked to display an exhibit of the 442nd and the MIS aboard the USS Hornet Aircraft Carrier Museum in Alameda.  Shiroyama was skeptical from the start. But Lawson’s response was immediate and simple: “Let’s do it.”

“His ‘can do’ attitude ruled.  And we did,” he recalls. “It is now one of the most unique and very popular exhibits honoring our Nisei veterans.”

Lawson’s life was a magnificent story of a “kid” from a small town scoring big in America. Montebello was so proud to have recognized Lawson as one of its outstanding alumni, Shiroyama said.

“He emerged as a genuine American hero and dedicated the remainder of his life to tell the stories of his fellow veterans and to preserve their proud legacy,” he said. “We will dearly miss him.”

He is predeceased by his wife Mineko Hirasaki Sakai and by sisters Misako (Perry) Sumida and Mieko Sakai.

A private funeral was held June 27 at Gavilan Hills Memorial Park. Pending COVID-19 restrictions, a memorial service will be scheduled later this year.