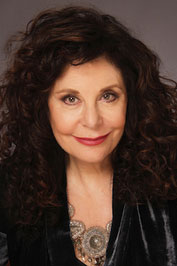 Charley Parkhurst was a Wells Fargo stagecoach driver who hauled passengers and freight throughout Northern California for 30 years starting in the Gold Rush period. Parkhurst often drove the stage to San Francisco or San Jose, using Monterey Road and occasionally passing through the area that would one day become Morgan Hill. Known as “One-Eyed Charley” after losing an eye due to a horse kick, Parkhurst had a secret hid for 30 years — the rough-and-ready stagecoach driver was a woman.

Born Charlotte Parkhurst in 1812, the truth of her gender was not revealed until after she died in 1879. Historians believe she might be the first woman in American history to vote — her ballot, cast as a male, going to presidential candidate Ulysses S. Grant in the election of 1868.

Los Angeles actress Karen Kondazian in 2012 published a historical novel titled “The Whip” about Parkhurst and her secret life (visit www.kondazian.com for details). The author will be at the Morgan Hill Library for an author talk at 2 p.m. Saturday Aug. 15 to discuss her novel. Morgan Hill Life asked Kondazian to tell readers about the colorful female stagecoach driver pioneer of 19th century California.

Charley Parkhurst is an extraordinary historical figure in California. What made you decide to write a novel about her secret and life?

I once read an article “Wild Women of the Old West” about Charlotte “Charley” Parkhurst, a woman who disguised herself as a man and became a famous stagecoach driver for Wells Fargo. The story fascinated me — how could she have carried this off and why did she choose to do this? When my mother passed away, I decided to write a novel about Parkhurst and dedicate it to my mother. Six years and 27 drafts later, I finished writing “The Whip.”

How did Charley Parkhurst manage to keep her female gender secret for three decades in a society of stagecoach male drivers who were rough in character?

To disguise her body, Charley bound her breasts, smeared dirt on her face, wore a scarf to cover her lack of an Adam’s apple and never bathed. Coming around the Horn on a ship to California (from Boston), she had the chance to study men’s behavior: men chewing tobacco, playing cards, cursing and swilling whiskey. She probably didn’t talk a lot either. I can’t imagine being so emotionally isolated as Charley was to have kept such a secret.

Parkhurst drove the Wells Fargo stage in the South Valley region and throughout the surrounding Bay Area and Central Valley region. Why is she relatively unknown to most Californians, do you think?

Because there’s not a lot of facts about her. But, at the Wells Fargo Museum in San Francisco, there’s a section on Charley. In Watsonville where she’s buried, she’s a local hero. There’s a plaque dedicated to her in Soquel (where she was the first woman to vote in the U.S. as a man in 1868). And now, with Hillary Clinton running, people are looking toward the empowered woman. I’m hoping “The Whip” finally gets Charley’s story out there to make her known.

You sometimes go to her grave in Watsonville at the Old Pioneer Odd Fellows Cemetery. What spiritual or psychological connection do you have with her?

I used to be a very shy girl. Charley’s courage to lead a bold, unconventional but fulfilling life inspired me to put my own arms around life.
You know, there are so many women who rose up in their cities, their countries, their century — sometimes giving their life to create new change.
Like Charley, their contributions have allowed me to live my life as a free and autonomous woman. I’m grateful to her and to them for it.
What lessons might Parkhurst give girls and young women today about empowering women?

One of my missions in life — through writing, acting and as a human being — is to inspire and transform in any way that I can. That’s what Charley’s life offers girls and young women.

To understand that anything is possible, even being the president of the United States. Charley’s family was taken away from her and instead of living a life of grief and shutting herself away, she grabbed life by the cojones and shook it up for her betterment.

“The Whip” is a story that would make a fantastic motion picture. Is Hollywood interested and, if so, what details of a possible film can you share with our readers?

I can’t say a lot about it now, but I can tell you that there is a screenplay, it’s in development and there’s strong interest from some extraordinary people.